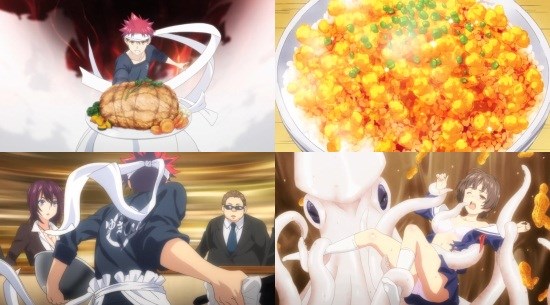 Last season, Gourmet Girls Graffiti (sadly not available legally in the UK) turned eating even the simplest of foods into an orgasmic experience for its cast (okay, other shows have done it before but never to these levels) in one of the more bizarre concepts we’ve seen recently, and it looks like the new fad for ‘food porn’ shows isn’t going away anytime soon with this season's latest Shounen Jump offering Food Wars. So then, it’s time to see if this show has what it takes to impress our judges or if it’s time for it to leave the competition (yes I’ve been watching a lot of Masterchef lately...)

Soma Yukihira is a young high schooler working part-time at his father’s small restaurant with a single dream – to surpass his father in cooking! From our first experiences of Soma’s cooking, involving honeyed squid tentacles, it would appear that he has a long way to go but it turns out that this isn’t quite the case. Whilst his attempts to craft his own flavour combinations might not be very good, when dealing with recepies and classic flavours Soma turns out to be something of a prodigy, creating food that tastes utterly divine. Unfortunately Soma’s plans get side-tracked when his father suddenly closes the restaurant to head off to cook in the US, leaving Soma behind with nothing but an interview at Totsuki Culinary Academy, Japan's most elite cooking school with a graduation rate of only 1% of students. Lumped in with a variety of elite snobs, Soma’s going to have to work hard to pull through the next three years!

These first three episodes of Food Wars are a little tricky to judge in terms of the series as a whole. Whilst they’re brilliant and really good fun to watch, ultimately its 100% set-up for the main plot which hasn’t really started yet, and whilst there have been some extended introductions for Soma’s gourmand rival Erina and the reclusive Megumi (likely to become the love interest and best friend respectively, though don’t expect the relationships to actually go anywhere – this is a Shounen Jump manga after all) we’ve only really seen the broadest of character set-up and the focus is pretty much all on showing off Soma as a walking encyclopaedia of cooking. Oddly enough though, whilst this combined with Soma’s arrogance should make him the most hated character of the season, he’s actually pretty good fun to watch as he baffles the other characters who are forced to accept he can cook good food. It’s going to be interesting to see if they can keep it up.

On a technical side, this is a Shounen Jump show so the budget was never going to allow for sumptuous visuals as they have a lot of episodes to plan for if the series keeps running (if you want to extrapolate out, the first three episodes cover roughly the first volume of the manga - there are currently eleven volumes and the series is still running) but it certainly looks solid and to their credit a lot of effort has been put into making the food look realistic and pretty tasty! It might not quite get you to the drooling desperation that Silver Spoon managed for as little as showing a carrot on screen, but you wouldn’t object to just having a nibble or two of the plates that Food Wars offers (and you could if you so wished as there’s already a thriving community replicating the series' dishes online and a cafe serving them in Japan is all but inevitable). Yoshitsugu Matsuoka (also seen as the lead in this season’s Is It Wrong to Try to Pick Up Girls in a Dungeon?) does a solid job as Soma, making sure that he stays likeable, and director Yoshitomo Yonetani shows that he really knows his stuff here given how simple a cooking show could be and keeps the action going - this could well be expected of the director of both the Tiger & Bunny movies!

In all honesty the only criticism I could level at Food Wars at the moment is that the structure is a bit too simple at the moment. It works for the first few episodes but realistically this is the same formula that other genres have been using for years - just replace the monster with a grumpy diner and the special attack with food - and really the series is going to need to push itself outside these boundaries a little to stay strong (perhaps they could do a tie-in with the BBC and have Soma enter a little-known British cooking contest with some familiar judges?) along with some more character development for Soma and his accumulating supporting cast. But, as it stands and based on these three episodes, Food Wars is looking very good in what’s shaping up as quite a strong season.

You can currently watch Food Wars! Shokugeki no Soma in streaming form on Crunchyroll.

8
This show is deliciously funny and entertaining so far.