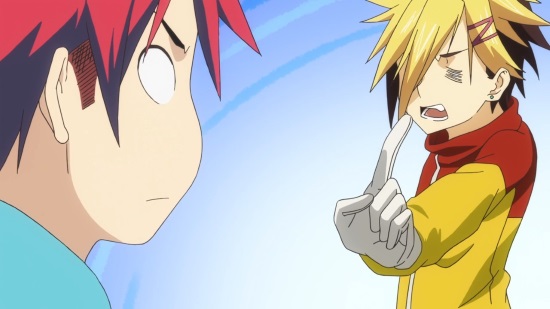 At Totsuki Culinary Academy you wouldn’t be able to get away with saying that ‘revenge is a dish best served cold’. It’d just raise too many questions such as; Why is cold best? What vegetables are served with it? Does it need a sauce? Could it be improved if it were deep-fried in peanut butter? It must make it really awkward for new dean Azami as there are just so many classic baddie lines he’d never get away with (if revenge is sweet then what kind of sweet is it? What makes up its umami?). As we pull into the second cour of the third season of Food Wars it’s a good thing then that he’s decided to sidestep all that nonsense in favour of being a much darker and more classical villain. But will Soma and friends be able to prevail?

Following Azami’s coup and attempted shut-down of every extracurricular club at Totsuki, he’s still failed to mop up the worst of the resistance. Annoyingly (for him) as the students get ready for the next round of vicious exams, his own daughter Erina, has decided to throw her lot in with the resistance and she’s going to teach them every trick in the book! No assortment of snow, trains, bears or snotty little members of the Elite 10 are going to make our heroes back down!

As the gang sets of on their exam-tour of Hokkaido there's lots of fun to be had between some well-timed character gags particularly at the beginning and some great Shoukugeki action as we move through the series. What makes things even better is the plot which has really brought Erina to the fore with the shockingly abusive relationship with her Father looming over her for much of the series and proving a new insight into her behaviour in previous seasons. Whilst things never get too dark or serious (this is after all a series where they have an actual detailed explanation as to why members of the Nakiri family can rip off their clothes through sheer willpower in the presence of good food), it brings a nice edge to the series and makes the goals of the gang feel a little more concrete than in previous series.

The only negative thing you could bring to bear is that the plot does stumble on occasion. The blistering pace of this arc leaves little time for many of the side characters (despite them having their own plot stuff to do this is completely off-camera) and the series still suffers under the delusion that Akira is an interesting character. This all follows the manga pretty closely though so it can’t be helped too much at this stage in the proceedings though it’ll be interesting to see what kind of legs the series has as it feels like it’s actually building up to that most uncommon of things for a shounen series – a planned ending!!!

If Food Wars is going to end then it’ll certainly have picked a good place to do it. Whilst I love this series to bits there is something to be said for not having the Bleach/Naruto/Dragonball/One Piece/Simpsons problem of carrying on far too long past the point where the show is actually good and anybody cared. There are places for the show to go however don’t get me wrong – a time jump (normally a terrible plot device) could work here if the current arc ends where it seems to be heading. Soma still hasn’t picked up on any of the romance flags being sent his way (one day he will see the truth that Nikumi is best girl!) and there’s still the question of who is Soma’s mother and is she at all relevent to anything? Hint – this wouldn’t be a shounen show if she didn’t turn out to have been the world’s greatest sous chef with a legacy for Soma to inherit on his 18th birthday or similar!

On the technical side things remain as they have done for the last two series – the show looks good though only the food itself (fittingly) gets the full star treatment, the voice cast is great and the whole thing is a lot of fun. Plus the show continues its equal opportunities fan-service so there’s something here to please pretty much all tastes!

So to summarise: Food Wars is still great, everyone should be watching this show and can anyone tell me where I can buy bear meat because I’m hungry!

8
We'd like to see Mary Berry do half as well!
COMMENT AND DISCUSS
blog comments powered by Disqus