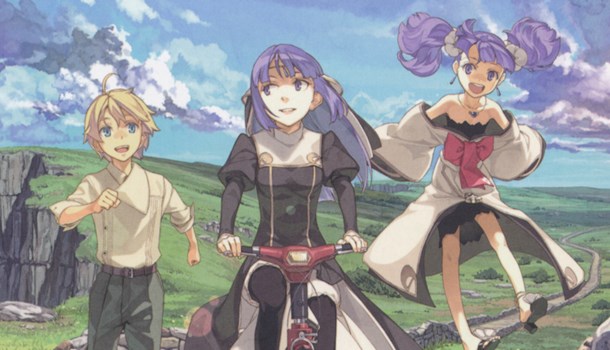 Until my review copy hit the mat I’d never seen Fractale. I had however, heard a great deal from other people who’d seen it and, given the huge bashing the show seemed to get from everyone, I was bracing myself to watch something truly terrible. What I watched though was nothing of the sort...

Set centuries in the distant future, Fractale tells of a calm and peaceful world governed over by the titatular Fractale system. What the system actually does is left somewhat vague, though it seems to be a combination of Internet and state welfare. Citizens are fitted with terminals, allowing them to interface with Fractale and see both holographic cities and vistas and also holographic avatars of people called Doppels (though it’s never made clear whether these are the people themselves projected long distance or copies of those people or some combination of both). The system is now failing after several hundred years of hard work and tension has broken out between the priesthood who watch over Fractale and Lost Millennium, a terrorist group formed of those who no longer get to enjoy the benefits of the system due to its spreading issues.

Our hero for the tale is Clain, a young boy living on his own with Doppels of his parents and dog who lives out his life collecting old technology (he can do things with an old iPod that certainly weren’t in the original specs!) His life is about to be turned upside down as he encounters Phyrne, a young girl fleeing from members of Lost Millennium whom, after a brief encounter, disappear into the night, leaving behind a Doppel called Nessa.

It’s these three characters that were always going to make or break this series as so much hangs upon them, and thankfully the series creators have recognised this and allow character development to take the reins here. Clain is that rarest of species in current anime – a likable male protagonist. He’s not spectacularly brilliant at everything, he doesn’t demean the existence of other characters in the series and he’s not just window dressing for a harem either. He’s just.... genuine. Being earnest, clumsy and enthusiastic in the way that he is makes him a great character from whom the audience can be introduced to the world of the series.

Nessa and Phyrne too bring some good stuff to the table despite both of them being much closer to traditional archetypes – the girl with the secret past and the ditz respectively. The other character all have their own bits and pieces as well but they’re much more one-dimensional, possibly due to the series meagre eleven episode run leaving little time to fill them out any more.

The story is a good one, running through several twists and turns as Claim discovers more and more about what makes the world run and develops as a character who goes from being totally passive to one who is prepared to start fighting for what he wants. The staff effortlessly pull all the emotional strings required with every gag pulling a laugh and every crying character making you really feel sorry for them.

The only real issue with the show in fact (bar my dislike of a certain element of the ending which is entirely personal and not a critique of the story) is that the overall concepts of the world are left a little too vague, particularly when it comes to the fight between Lost Millennium and the priesthood. Yes, the priesthood are revealed to be doing some dodgy stuff but mostly this is within their own ranks and doesn’t affect anyone else in any negative way. It leaves you with a situation that’s like that of the Matrix, where the society is perfectly fine and not hurting anyone but the few people who don’t get to benefit have decided to throw a hissy fit and make sure no-one else gets to play with all the toys either.

Visually Fractale is fairly solid - aside from the Doppels nothing particularly stands out in terms of character design and there are a few instances that could have used some more work, but the animation is smooth and it’s more than sufficient to tell the story. It’s the same with the sound and voice work – everything is just as it needs to be without standing out. It’s the sign of a show made on a tight budget, albeit one that’s been very carefully managed to get the most mileage out of every Yen spent and that’s no bad thing – I wish some higher-budgeted shows could achieve and maintain such a solid standard across their runs!

The one issue that does rear its ugly head here is Manga Entertainment’s old friend - disc authoring issues. Whilst following their almost total absence in Okami-san chapter points have made a welcome return in all their glory, the second disc has a pretty major issue. If you are using the "play all" function you will be kicked out to the disc credits screen after episode nine even though all eleven episodes are present and correct on the disc itself. If like me you weren’t counting the episodes you’ll be left angrily pondering why the series had to go and leave itself on such a stupid cliff-hanger for a second series that never happened. In fact it was only after starting to read Wikipedia in preparation for this article that I realised there were two more episodes that I had to watch using the episode select function (a second attempt through play all duplicated the issue so be warned!)

So there you go, in spite of all the criticisms I’ve heard pointed at it I really liked Fractale. It’s a solid, character-driven show that knows exactly what it’s doing and I really recommend it. In fact, I liked it so much that I wish I could give it a higher score - if it weren’t for the problem with disc two I’d certainly put it up to a solid 8 out of 10.

English and Japanese audio with English subtitles.  Extras consist of a trailer for the series and two US cast episode commentaries.