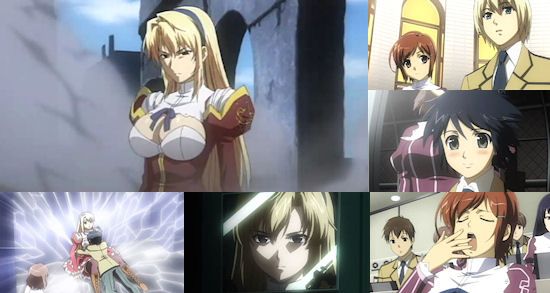 Freezing seems to have a bad rap if you look around the Internet, but now that its headed to the UK it’s about time we found out if it deserves that reputation as the complete collection hits shelves in the UK on DVD.

Freezing is based on a manga series and introduces us to a world where interdimensional invaders called Nova appear sporadically to cause havoc. Standing in their way are a force of young girls called Pandora with the ability to produce weapons and clothing from thin air because of.... well, that’s never really explained. Supporting them are a group of young men called ‘limiters’, who are able to neutralise the abilities of the Nova in order to allow the girls to fight better.

The relationship between the Pandora and their limiters is the main source of the drama and comedy throughout the series, which mixes a hard-edged over-world plot and a series of fights between students  - with the more comedic elements though, and unusually given the setting, it never really becomes a harem show.

When Freezing does something right, it does it very well.  The combat scenes are very strong here and tend to be fairly graphic and visceral – you’re never in any doubt that the combatants are actually fighting and can and will rip each other to shreds if they can. Whilst the fan service is evident throughout all of this, it has to be said that it’s pretty much totally overridden by everything else that’s going on and, unlike shows like Queen’s Blade, it doesn’t feel totally gratuitous. These sequences are a pleasure to watch (no, not in that way!) as is a large amount of the show – this is a series that can and will go down some very dark routes and it’s great to see shows do this. In particular, Satellizer’s back story is quite a harrowing tale.

Visually, the animation is fluid and the CG elements aren’t particularly intrusive, though the character designs are a little basic. The plot is als interesting enough for the most part, meaning that you’ll want to stay around to see what happens next.

On the flip side of all this, when Freezing does something badly it does it very badly indeed, and in Freezing’s case ‘bad’ refers entirely to its leading man. Kazuya is the most pointless creation in any show I’ve seen for a long time - there is literally not a single evident reason for him to be in the series at all, his back story is all but non-existent and the other characters who interact with him more or less do it simply because he’s there; all he seems to do is slow down the plot and get in the way. He’s not there to help the fan service along either, as he never has that kind of ‘accident’ and Freezing shows itself to be more than happy to go down the yuri route anyway. Not even the most placid, shut-in Hikkomori would ever relate to the protagonist and the whole time he was on-screen I found myself thinking "come back Shin Asuka, all is forgiven".

On a lesser note, there are very minor issues in that the character names seem to have been decided by sticking pins in a dictionary, making them all but impossible to remember and despite the blood and gore on-screen the series still lacks bite a lot of the time. We’re constantly given references to ‘room entry’ and ‘baptism’ which one suspects are sex metaphors but this is never confirmed nor do they ever happen, even off-screen. Characters who are injured suddenly heal inexplicably (even given the already fast healing they all have) and whilst you see them take a hit and blood flies everywhere, there clearly isn’t so much as a scratch on them in the close-ups. You also have to add to this the fact that the series finale is severely lacking and disappointing (though for spoilers sake I won’t say exactly why) - one suspects that this is partially due to that age-old issue of the anime being made before the manga was finished (and twelve episodes are never going to cover a manga that’s at sixteen volumes, not including spin-offs, and still going).

The one flaw we can put at Manga Entertainment’s feet is the fact that each disc of four episodes only has one chapter point per episode, meaning that you have to watch or fast forward (and risk missing parts of the show) through the awful J-rock fuelled opening credits. I thought we had this down by now guys – chapter 1 covers up to the end of the opening theme, chapter two takes us to the midpoint at the episode, chapter three to the start of the ending credit and so on.

To be honest, after watching through the series I’m not too disappointed and I even quite like Freezing. It isn’t going to set the world on fire (as its name suggests! - Ed) but you could certainly do worse than spend a couple of evenings ensconcing yourself in the series huge bosoms.

One more thing though – the uber-fan-service OVAs on the first disc are probably better watched after the rest of the series, as they include characters who haven’t been introduced at that point. Just a hint!

6
Freezing is better than you've probably heard, but by no means flawless.
COMMENT AND DISCUSS
blog comments powered by Disqus