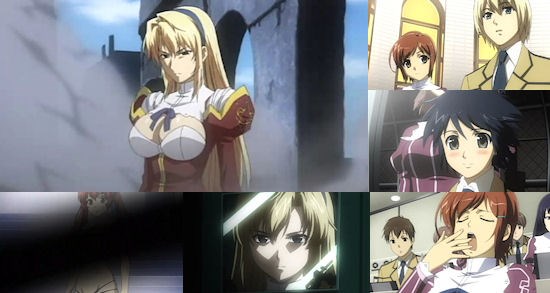 In a near future world where humankind is finding itself under constant threat of invasion from the destructive Nova alien race, only a unique brand of female warriors known as Pandora have the power to fight against them courtesy of special properties named Stigmata, which gives them unique abilities, healing and weapons.

Sounds like a half-decent (if over-used) concept for a sci-fi anime series, doesn't it?  It probably would have been too, had it not been turned into the violent fan service-laden show which is Freezing, currently available to UK viewers via FUNimation's YouTube channel.

Freezing introduces us to its premise via the Genetics school, which serves as a ground for training and educating not only Pandora themselves, but also their younger male counterparts known as Limiters who work alongside them to boost their powers and act as the source of the "Freezing" power which makes up the show's title.  More specifically, episode one kicks off with a contest known as the "Carnival", and all-out battle between the school's Pandora to rank the strength of each individual.

This opening instalment pretty much sets the tone for what is to come, treating us to an almost relentless parade of breasts, crotches and horrific violence as various Pandora literally tear one another to shreds in an orgy of exposed flesh (of course, clothes get ripped off frequently in this series), decapitation and blood.  At least, I think that's what happening, as the "clean" broadcast version used by FUNimation for their streaming service is so clumsily and horribly censored throughout that many scenes are rendered as little more than huge black or white smears across the screen to hide "the bad stuff".

With most of its fan service blotted out (even the show's mid-episode eye catches are censored), Freezing is left to rely on its story and character roster, featuring a young male transfer student who still misses his dead sister and his unexpected acquaintance with the top-ranked Pandora nicknamed the "Untouchable Queen" - she doesn't like to have anyone touch her and she's also seemingly unbeatable in combat, see?  Throw in one rival Pandora with a haughty attitude and another whose a man-eater and you have yourself Freezing's opening three episodes boiled down to a single, repetitive element - violent and degrading fights between girls to accommodate the aforementioned mix of bloodied bodies and torn off clothing.

Although I have nothing against either gratuitous violence in anime (witness my love of the likes of Black Lagoon, for example) or blatant fan service for those who like that sorts of things, I have to confess discomfort at the way Freezing blends the two, serving up nudity and panty shots at the same time as guttural violence and impromptu amputations.  Clearly, this marks me out as being outside of the target audience of the series, but then again even if you are part of that group you'll despair at the incredible amount of censorship on show in this stream, which on occasion appears to infiltrate even innocuous scenes for some reason.  Add to that FUNimation's poor encoding quality for said stream, even in its 480p resolution on YouTube, and there's little to be gained from watching the series online.

Overall then, I might as well come clean and state for the record that I hated Freezing - I was hardly enamoured of its tired and over-used character types or its alien invader designs that borrow heavily from Evangelion and RahXephon, but there's something that inherently bugs me about the way violence and sex are mixed within this particular show to the point that I find it almost abhorrent.

Putting such personal feelings to one side for a moment, if Freezing does seem like your kind of series (and I have no bones with those it does appeal to) then you'll still be best served to wait for a DVD or other kind of uncensored release to really make the most of it - both its story and its visual elements are spoiled utterly by the combination of poor video quality and censorship, to leave little reason to recommend sitting through the series unless you're desperate to watch it immediately.

You can currently watch Freezing in streaming form via FUNimation's YouTube channel.

4
A rather grubby concoction of nudity and gratuitous violence, whose selling points are blasted from sight by over-eager censorship. If this series interests you, wait for a DVD release.
LATEST REVIEWS