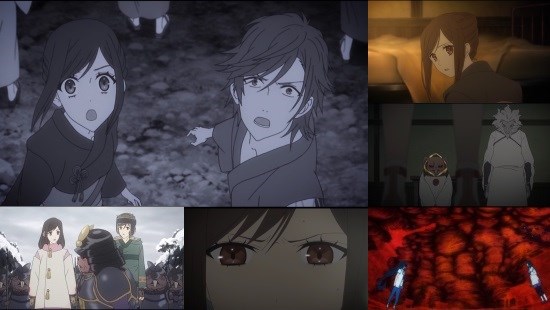 From the New World - Part 2

The first half of the series set up this premise by showing the way in which the village elders control the people within the village, the main targets of which were the village's children and their powers. With the facts and information established regarding this, the second half is a constant barrage of action showing what happens when that control is lost. This time around it's now the control of things outside the village that becomes all-important; control which is exhibited through various forms of management and suppression. While the villagers work to organise the population of the outside to reduce threats to their way of life, the outside forces work on self-governing and organising themselves into larger groups. From this, we see a complete change in the society and rules within the wildlife surrounding the village, and how this change impacts the entire dynamic between the power-wielding human populace and the put-upon monsters in the wild.

With the foundations firmly set in place, this leads the way into the last story arc of the series where everything becomes incredibly frantic and dangerous. At first, the series dealt with threats that were hidden and lurking in the shadows, but now the threat comes to the fore and actually puts the characters into an even more life-threatening situation. While at times unseen the threat is more than real, not only affecting the main cast but the entire village. This includes some rather tense moments where the characters run and hide from the threat, bringing with it a feeling of helplessness. The series shows an interesting dynamic in how certain characters handle this feeling, giving the setting a bit more depth than previously as it shows the reactions from other characters not within the main group of focus. For the most part these characters don't get enough attention to make them memorable or interesting, but what the series does well with them is show how unique the personalities of Saki and the others are compared to the others within the village.

In order to combat the new threat to their village we see Saki and company have to dig into their knowledge from the past and use an unlikely weapon to combat it. This is where things get really interesting - the series expands the world beyond the village and surrounding area, showing the devastation and harsh reality of how the world has changed over the past 1,000 years. While this mostly pertains to how inhabitable most of the world is and how full of monsters and other such terrors it has become, during this time the main intrigue comes from the realisation and confirmation of certain aspects of the narrative from earlier episodes. This mainly relates to how humanity has survived over the course of that thousand years, with themes of control through education, suggestion and gene therapy are brought back to show some quite shocking revelations. Shocking as they may be, for those who pay attention to the show and it's discussions they are rather predictable.

From all of this, it feels like From the New World's second half has focused more on an action-packed story, changing tone slightly to become a tense thriller rather than the thought provoking and intriguing mystery series that the first half set itself up to be. That being said, the way in which the series handles the threat at its core ties in rather well to pre-existing themes and plot points discussed earlier within the show. In this regard it feels like all the mystery and intrigue of the series is more firmly placed in its first half - while the mystery aspect has dulled, the action-oriented and tense thriller aspects that have replaced it are extremely fascinating in their own right. While the first half of the series did a great job of making the world an interesting place, the second half does more character building and world expansion. By placing the characters in their situation and having them discuss ways to resolve it, the show manages to still be fascinating and attention-grabbing to provide perhaps one of the most unique viewing experiences seen in an anime released this year. As a result, the second half of the series builds upon a rather strong foundation already in place to deliver a substantial conclusion to the series that manages to tie up everything together in a rather satisfying way.

9
An action-packed and tense set of episodes lead to a satisfying conclusion to the year's most unique series.