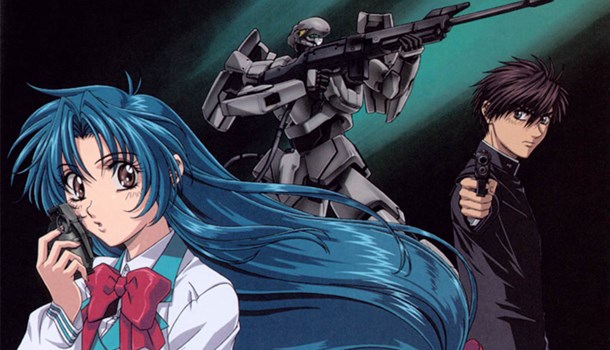 Full Metal Panic! is a new 24 episode mech anime from Gonzo, the same guys who brought us Nadesico, Gatekeepers, Hellsing, Vandread & Blue Submarine #6 - but I'm sure most of you already know all that.

A guy by the name of Sagara Sousuke is a member of a secret organisation called Mythril (A kind of UN). He's about 16-17 years old, very young for a person in the military, we might know later on why he's been enlisted. He and and his two allies each have a type of mech that can go invisible and look pretty damn cool whilst doing it, always handy for doing untold damage and pulling chicks with :)

The mission they receive at the beginning of the series is to protect a "Whisper" candidate called Kaname Chidori, who is roughly Sousuke's age, because the KGB seem to be after these candidates. It's Sousuke's job to watch and protect her, so he gets enrolled into Chidori's High School. He gets in trouble as soon as he tries to enter the school grounds is for bringing in a toy gun (or is that real..?).

As we soon learn, Sousuke is somewhat lacking in the social skills area. For example his introduction speech to the whole class is about the fact that he's into military arms and collects various military magazines across the world. Chidori doesn't like him much because he's constantly following her. She also thinks he's a terrible pervert...

The main bad guy so far is a man by the name of Gauron - when we first meet him we see him giving information to the KGB about the Whisper candidates, amongst which is a picture of Chidori. From that meeting we can tell that he isn't a very nice guy - first of all he kills one of the KGB and then tells the surviving operative that he wants more cash. Nice fella...

From the 4 episodes I've seen so far, its managing to hold my attention. To get enough story and character introductions in the first 4 episodes this well is an achievement in itself. I want to see more of Gauron - he's one evil and very cool character, and I'm sure there's a lot more to see of him later on in the series.

The animation on the characters is really nice. There are a couple of CGI moments, but the big one is the CGI animated Mythril Submarine. Unlike Gonzo's Vandread where CGI is heavily used, Full Metal Panic! is less heavy handed in the computer department. There may be a lot more CGI sequences further on in the series, we'll have to wait and see.

The opening animation is fantastic - this is what made me watch the series in the first place. The song on the opening is beautiful, its called "Tomorrow" and its by Shimokawa Mikuni who wrote the song especially for this anime. The ending song is also very good, its called Karenai Hana and its also done by Mikuni.

Fan-Service aside (I like my fan-service ^_~) Full Metal Panic! is a very enjoyable series full of characters that your gonna love with a story which should end up with a lot of depth and most probably a bit of a love story as well.
9
This show is definitely one of the best animes of the new year, lets all thank Gonzo for the geniuses that they are!!! (as you most probably guessed I'm very Gonzo biased :P)
LATEST REVIEWS