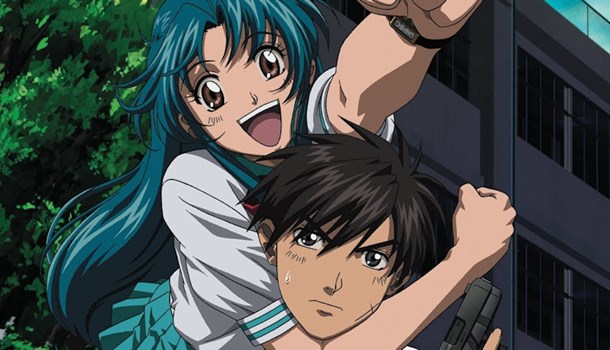 I don’t get on with anime slapstick comedy, I really don’t. Whether it’s Urusei Yatsura or Burn Up W, I’m completely turned off by the usual overreactions, gaping jaws, comedy violence with big mallets - it just does nothing for me as a genre.

Imagine my surprise when I found myself laughing out loud at FMP? Fumoffu.

Unlike Fumoffu’s predecessor, it’s set entirely around the school hi-jinx of military nut Sousuke Sagara and his feisty charge Kiname Chidori. As such, you don’t really need to have seen FMP to appreciate this series, which is a bonus.

Broken into 15 minute plots, the series deals with everything from lunchtime brawls, love letters and trips to the beach, all complicated by Sagara’s bizarre worldview and a cast of characters intent on getting the better of him.

What makes Fumoffu work so well is the absurdity of Sagara’s reactions to everyday events. Seemingly unable to adapt to civilian life, the combat crazy Sagara applies the most extreme military practices to every situation he’s faced with – when he runs out of ammo whilst playing an arcade shooter, he empties live rounds from a real gun into the screen! And the reason it works so well is that he handles these events as if they’re completely normal – everything he does seems (to him) calm, cool and utterly logical. It’s this understatement that makes his character work so well, and unlike Ataru Moroboshi from the aforementioned Urusei Yatsura, there are no hysterics or slapstick farce, just a shrug of the shoulders and on to the next task. Wonderful stuff ^_^

The character designs are crisp, clean and well animated. Every still looks fantastic and the direction by Yasuhiro Takemoto is spot on. On loading the disc menu, you’re greeted with an A-Team style score, which suits the series sensibilities perfectly. Another nice touch is the Fumoffu fold out board game that comes with the disc. Whilst only sporting 3 episodes on the disc, the extras go some way to make up for it.

Overall I’d recommend the series to fans of the original or just those who enjoy a solid anime comedy.
8
Solid storytelling and some genuine laugh-out-loud antics. Another episode or two would have seen this score higher.