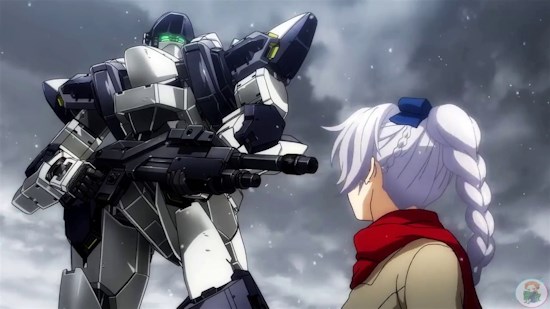 So, 12 years since it’s last outing in animation, Full Metal Panic! returns in the form of Invisible Victory to continue the story of everyones favourite military maniac Sousuke Sagara and his classmate/girlfriend/assignment (it’s complicated?) Kaname Chidori. So how does returning to this franchise a decade on hold up? Let’s have a look at the first 5 episodes that have aired to date and find out shall we?

Well for one thing this is far more The Second Raid than Fumoffu, with the humour dialled waaay down whilst the action, tension and violence is cranked up. That's not a bad thing at all as FMP has always had a particular knack for action scenes that both entertain and propel the story along. Stripping away so much of the humour means that when the paramilitary shadow war between MITHRIL and AMALGAM begins, the sight of Sousuke and Kaname engaged in a fight for their lives through the streets in broad daylight becomes especially dramatic due to how jarring it is compared to what the franchise has typically done, and comes to a head when Jindai High becomes a literal battleground at the end of episode 4.

There is something incredibly powerful (and oddly topical) about seeing our heroes classmates – a bunch the series has made essentially likeable over past seasons – realise that no, Sousuke is not just a kid with a military fetish, he really is a professional soldier. I’m intrigued to see how/if this gets resolved as the series progresses, especially given how clearly they demonstrate how he has opened up emotionally compared to where he was at the start of the first season.

Equally Kaname gets to show off her own growth as she takes the unfolding events in her stride and accepts that her abilities as a Whispered are an asset and can help in ways no one else can, and that she may have to find a new place in the world in the same way that Tessa & Leonard Tesstarossa have.

I’m  starting to ramble a bit but in these five episodes there is a lot to unpack: The SR teams thrilling defence of MITHRIL’s island base against a trio of Behmoths, with Kurz being the voice of experience; now-Lt. Mellissa Mao being her indomitable self; the beginnings of Sousukes adventures in the world of AS arena fights (gods, let’s see how Solaris 7 that gets mech fans…). There is a LOT to like here, but it’s not without a couple of niggles

First, some of the CGI work in the vehicle chase scenes and mech fights can seem like it’s lacking a lot of weight, but they remain generally well executed and it’s kindof the nature of modern anime, for better or worse.

Secondly, and it’s not so much a niggle as something for viewers to be aware of, Invisible Victory does not hold your hand or take time to get you up to speed – this series expects you to have some familiarity with the series and characters, events of the past seasons, and shoots off like a shot (What? There are people who haven't seen Full Metal Panic? - Ed). Even as someone who has watched the three prior series of FMP multiple times over the years there was a bit of whiplash as I had to remember some of the finer details of past events. I think new viewers will pick things up, but it may be a tad confusing at first…

So, that is the sub, but what about the dub? Well all I can say is I am astounded by how easily the returning cast have slipped back into their characters, and you’d barely know it has been over a decade since they last played them. I’d go so far as to say this is probably the best option for those new to the franchise as you can focus more on what is actually happening on the screen, rather than trying to follow subtitles.

Overall then after the first 4 episode arc, 1 recap and the first episode of the next I’d have to rate Full Metal Panic! Invisible Victory as a solid 8 on the sub but bumped up to 9 for the dub. Knock a point or two off if you are a new viewer due how it jumps straight into things.

9
A brilliant continuation of the Full Metal Panic series