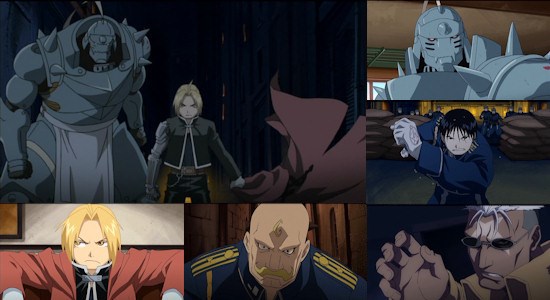 The Elric brothers are back!  Whether you've been keeping up with the latest volumes of its manga incarnation or you're a big fan of the original 2003 anime series, such an opening proclamation can surely only be music to your ears, for all things Fullmetal Alchemist to this point have been nothing but a sign of absolute quality.  Now, with the anime form of the franchise returning to our screens with the promise of sticking rigidly to the story told by the manga unlike its predecessor, is FMA fever ready to hit the UK all over again?

If you're an existing fan of Fullmetal Alchemist, then Brotherhood's opener is certainly designed to cater to your particular whims, dumping us as it does into the middle of Central and the rogue Freezing Alchemist on the run after defecting from the military.  Of course, he soon finds himself facing off against Edward and Alphonse Elric, bringing us a dose of spectacular action that soon brings plenty of other old favourites into its fold while letting a couple of tasty, teasing morsels regarding the story to come to drip onto our collective palates.

If newcomers to the franchise feel overwhelmed by such a huge dose of unfamiliar settings and characters with very little explanation in sight then fear not, as the series hasn't forgotten you, and thus the rest of this first release of thirteen episodes is largely concerned with re-treading much of the same ground covered by the original TV anime series before it diverged from the manga out of necessity.  This need to retell a story already familiar to so many fans has obviously left producers Studio BONES in a difficult situation where they simply can't please everybody, and thus fans of the original TV series or manga might be frustrated by the brevity with which some of these early incidents are covered - we race through the Elric brothers past in a fast but brutal treatment of the incidents which have led them towards their current path, and various other goings-on are given brief (but to be fair more linear) glimpses as we race on towards "the good stuff" later in the series where the first anime adaptation never had an opportunity to tread.

These early episodes of Brotherhood also have a bit of a tendency to lay the humour on too thick and frequently - Yes, there are some genuinely funny comedy moments and sight gags to be found, but there are only so many jokes on account of Ed's height that you can take before the joke loses its lustre, especially if you're watching a whole bunch of episodes in one sitting.

That said, there's no way I want to get bogged down in negativity about the early episodes of this series - If you're new to the franchise you will almost certainly be blown away by Brotherhood from the outset, as it demonstrates a deft touch when it comes to blending a compelling, action-laden narrative with some genuinely dark and irrepressibly human moments that will draw the show's major characters close to your heart before you know it.  More long-standing fans of the franchise will likely be a little harder to please given the fact that we've seen everything these episodes have to offer before (minus the odd major change here and there), but trust me - The best is yet to come.

Even if you are one of those old-school cheerleaders of Fullmetal Alchemist, you'll doubtless agree that it's an absolute pleasure to see this intense yet entertaining world of alchemy, drama and conspiracy brought back to our screens, and with a new-found polish and purpose to it thanks to its closer ties to the manga this looks set to be the best animated representation the Elric brother's journey yet.  Hold onto your hats everyone; this is only the beginning of an anime sensation that will rock you to your foundations...

English 5.1 and Japanese 2.0 audio with English subtitles.  Other extras consist of text-free opening and closing credits, and audio commentaries for episodes one and ten featuring some of the show's English voice actors.

8
Retreading old ground may frustrate fans of the original anime, but Fullmetal Alchemist is back with a bang and that's all that matters.
LATEST REVIEWS