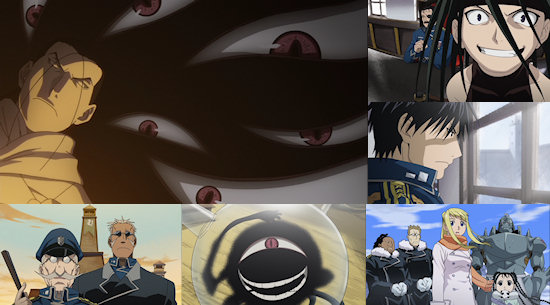 To say that things are beginning to heat up as we reach this penultimate DVD instalment of Fullmetal Alchemist: Brotherhood would be putting it mildly - come the end of the thirteen episodes spread across these two DVDs, you'll be reaching for the fan and some ice cubes, such is the extent to which the heat burning under the series is ramped up.

Anyhow, let's not get ahead of ourselves, as this fourth part of the series returns us to a world where the battlegrounds between the huge conspiratorial forces at the heart of the military and those seeking to rebel against their plans seem to have been redrawn, with Olivier Armstrong posted to Central as Bradley and his minions look to reassert their command over the northern forces of Briggs.

Away from this, we take a detour (and an important one at that) into the life of Hohenheim, via an episode which dips back into the humble beginnings of his past and how he came into association with the first Homunculus; a story which explains the destruction of Xerxes and fills in the gaps surrounding the lives of both "Father" and the Elric brother's dad.  From here, we follow Hohenheim's investigations as the final pieces of the puzzle fall into place surrounding the Homunculi's plans, meaning that it's time to turn full tilt into the final straight of the series as it pits our motley assortment of heroes and anti-heroes against the massed forces of evil that hold the power of the country's military in its grip.

Oh, and how wondrous are the early exchanges of this "final battle" to view... as you make your way through the episodes massed upon these two discs, you'll frequently find your breath snatched from you and your jaw gentle lowered from its default position as Fullmetal Alchemist: Brotherhood delivers some of the most stupendous action scenes the series has delivered yet.  A spectacular yet brief skirmish between Greed and King Bradley sets the bar for the show's action components for this volume in episode forty-five, only to threaten to set that bar higher still on a number of subsequent occasions as the stakes are raised and the revolution against the powers that be begins with the so-called "Promised Day" which threatens the entire country now looming large.

While I could wax lyrical all day about those stand-out moments of riveting and fluid animation (Hell, I could simply sit and watch them all day), the real genius of Fullmetal Alchemist: Brotherhood is that it doesn't simply revolve around its typical shounen battle fare.  Sure, there are moments of action-packed fighting that are predictable in the way they pan out to some degree, but there's simply so much more to the story than simply these tests of strength.  Perhaps most notable in this volume is the manner in which the series manages to keep a number of different plot threads involving different individuals in disparate locations moving along at an exceptional pace without ever feeling disjointed or confusing, happily bringing together or splitting these elements as required to ensure that there's never a dull moment whilst also creating a compelling blend of action, character development and storytelling.

It's a near-perfect mixture that is simply a joy to behold - intelligently written but not highbrow; bloody and brutal in its treatment but never gratuitously so and twisting its characters and their motivations to fit the ever-changing goals of those involved without feeling forced at any time.  More simply, the world of Fullmetal Alchemist as depicted here feels like a living, breathing one that seems utterly believable as a result despite the outright insanity of many of its plot elements - everything fits so succinctly into its world view that after a mammoth viewing session you almost need to remind yourself that you can't make yourself a coffee simply by clapping your hands together and manipulating the water in the kitchen to your will.

Chances are, you will end up watching this volume of Brotherhood in big chunks as well - I would dare anyone to tear themselves away from the series at this juncture after a single episode, when each and every instalment features some kind of juicy cliff-hanger or simply the desire to find out what happens next as events increase in importance and urgency by the minute.

On the technical side of this release, video quality seemed a little more washed out and with the odd minor colouration issue compared to previous volumes that thankfully didn't spoil our enjoyment of the episodes included at all, while the show's dub remains respectable and the subtitles appeared to be error-free to our eyes.

If you've been holding off on picking up this series from Manga Entertainment before this point, let this be the moment where you decide to hold fire no longer; by this fourth volume there seems to be little doubt that this series has progressed a long way from its stumbling early steps to move to the brink of being an outright classic - a stupendous treatment of a powerful manga series that deserves to be watched and enjoyed by anime fans of any age and gender courtesy of its near-perfect manipulation of the various elements of which it is made up.  Assuming its final volume lives up to the hefty expectations now thrust upon it, one could almost call the creation of such an outstanding series alchemy...

English 5.1 and Japanese 2.0 audio with English subtitles.  Extras are made up of textless opening and ending credits on disc two, while disc one features commentaries on episodes 40 and 46 courtesy of the show's US ADR director and the English dub voice actors for Havoc, Winry and Hohenheim.

9
Another brilliant batch of episodes from a series which is fast on its way to being a memorable classic. If you haven't been keeping up with Fullmetal Alchemist: Brotherhood, now is the time to start saving up for those DVDs!
COMMENT AND DISCUSS
blog comments powered by Disqus