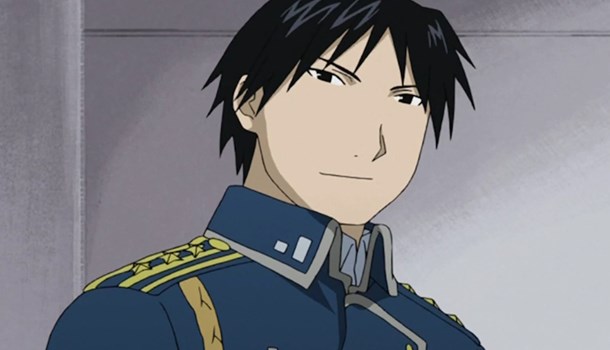 Following volume 3, the Fullmetal Alchemist story starts to come together, but gets off to a false start by repeatedly gaining pace, only to suddenly slow down.

As part of his State Alchemist training assessment, Ed challenges Colonel Mustang to an alchemists’ battle in order to find out about a Doctor Marcoh who has information about the philosopher’s stone.

Before the battle, Hughes steals the show and brings a much-needed dose of light-hearted fun to what starts as a slow episode. The ensuing battle is highly entertaining and leads to new revelations about Mustang, as well as his ‘inspiring’ dream for the military, which will have you laughing.

Lust and Gluttony watch the street battles in Lore from the church balcony, where they are joined by Envy, who reveals his true appearance.
Here the English and Japanese voices clash. While Envy is quite an androgynous character, the English voice is clearly a woman’s, while the Japanese voice sounds like a young male. Hardcore anime fans will probably hail this as another triumph of subs over dubs as the female voice doesn’t fit the character.

Scar gets plenty of coverage in the second episode, bursting heads and tearing off limbs in spectacular fashion, while explaining the motives behind his actions with crazed fanaticism. To the rescue comes a new character; the enormous Major Alex Louis Armstrong who flexes his ‘beautiful’ muscles, while surrounded by pink sparkles.

The fourth volume is beginning to build the pace of the series, while each instalment becomes less episodic and clues are dropped into place for later.

The extras are consistent with the previous volumes with opening and closing credits as well as some character sketches.
7
Scar pops heads, Armstrong flexes his muscles and a new baddie makes an appearance, but the episodes are slow in places.
LATEST REVIEWS