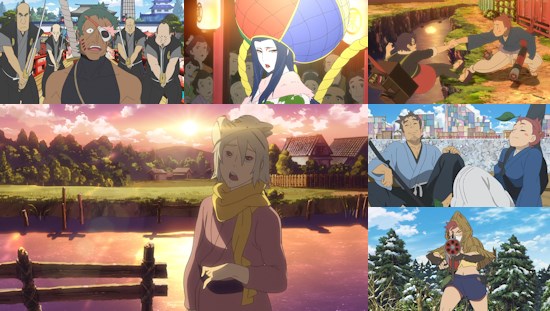 Fuse: Memoirs of the Hunter Girl

Oh, how time flies - it's hard to believe that it was back in October of 2013 when I got to see Fusé for the first (and indeed second) time as part of that year's Scotland Loves Anime festival - a UK premiere from which you can see my initial knee-jerk thoughts on the film courtesy of my review at the time. Now, over two years later, Masayuki Miyaji's film commissioned to celebrate publisher Bungeishunjuu's 90th anniversary has finally arrived on home video for all and sundry to consume, and whether it's due to circumstances or environment I found myself enjoying the film a whole lot more this time around.

Hamaji Ohyama is a girl who lives a simple life - with her brother living in the city and her grandfather having recently passed away, she lives alone fending for herself by expertly hunting for food and nourishment. Not that this existence seems to bother her - if anything she revels in it - but nonetheless a letter from her brother inviting her to join him in Edo doesn't require a second thought, and off she sets for the big city.

To call her arrival in Edo a culture shock would be an understatement. The noise and bustle of the busy streets are almost intolerable for her, but that isn't the worst of it - in the midst of all of this is a display featuring six severed dog heads, with room for two more. The concept of death and killing an animal isn't alien to Hamaji, but the reason for such a gruesome display is - why kill something if not to eat it?

The truth in this case is effectively self-defence, for Edo is living in fear of the Fusé - eight dogs who can morph into human form to blend into the populace, seemingly at will, and who hunt humans for their life essence. Given their threat, a hefty reward is on offer for anyone who can behead and kill a Fusé, and that's exactly why Hamaji's brother Dousetsu has invited her to join him, in the hope of making it big (and not to mention rich) by using her expert skills to despatch at least one of the remaining creatures. So begins Hamaji's adventure in Edo - a journey of friendship, love, and no shortage of realisations about both the nature and identity of the Fusé.

Given its origins as a celebration of a publication company's longevity, it perhaps shouldn't be surprising that a big part of Fusé's outlook is as a celebration of media and story-telling. The film has a rich layer of meta-narrative around this theme, whether it's a trip to see a kabuki troupe, a young girl selling stories via woodblock print, or the revelation that said girl is related to Takizawa Bakin, the author of Hakkenden whose novel series Fusé aims to be a "counterfeit" version of. It's easy to skip over this layer of its narrative as simply another part of the film's attempt to generate atmosphere in its depiction of Edo, but to do so is to lose a surprisingly hefty chunk of the movie's weight and charm.

That said, Fusé's interpretation of Edo is a delight that achieves results in a very different way to the more recent Miss Hokusai but still succeeds in a similar fashion ultimately. The city as seen here is as it should be - crowded and bustling, dizzyingly noisy, and frequently a riot of colour as its melting pot of humanity swirls around Hamaji as our cipher to this world and its daunting nature. No matter what you think of its story, this is a movie that you can immerse yourself and revel in simply for the depiction of its setting, filled with gorgeous backdrops and engaging colours that make this film a must to be viewed on Blu-ray to fully appreciate.

That story is, perhaps, where this film becomes a harder sell. Fusé has no shortage of likeable characters who manage to arrive into the story feeling like fleshed-out individuals even where they aren't given much screen time, and although they're given little opportunity to develop beyond that they all play their roles well and give you reasons to invest in the narrative. The issue here is that the story itself never gives you much opportunity to invest yourself in it directly - as much as you root for Hamaji throughout, you can never quite shake the feeling that she is simply a character in a story to whom things are happening for the purpose of the narrative, rather than a living being encountering these experiences. Perhaps this is simply another layer of the film's metanarrative about fiction and story-telling - a prospect that comes into even clearer view at the end of the movie as it deliberately leaves things hanging - but it still doesn't avoid the fact that as the end credits roll you're left with an unsatisfactory feeling that there is a layer of the story missing. Admittedly, at least some of this seems related to Fusé's origins as it riffs liberally upon Hakkenden - there are elements of the film's final act which seem to assume knowledge of that story which a western viewer simply might not have, giving rise to one or two head-scratching moments which further serve to push you away from engaging with its narrative on a fundamental level.

For all of that, the yarn that this film spins is good enough - it revels in its beautifully depicted exploration of Edo, its loose character animation pays dividends when things get hectic, and the resulting movie is a great experience far more than it is a great story. If you're okay with ceding the latter to enjoy the former, then you'll probably have a good time with Fusé: Memoirs of the Hunter Girl.

We've already mentioned this movie's visuals plenty, but let's just run through this one more time - if you're going to watch this film then do so on Blu-ray to fully enjoy them, as they look truly terrific on that format. Beyond that, the presentation of this home video release is without fault - there's no English language dub here but the Japanese language track is decent enough, and the film's subtitles are strong and free from any major issues. We can't speak to the contents of the film's Collector's Edition release at the time of writing, but an opportunity to indulge in more of its artwork certainly seems like a potentially valuable one.

As I mentioned in my opening to this review, my overall thoughts on Fusé: Memoirs of the Hunter Girl have softened thanks to a fresh viewing and the intervening years - I criticised its over-reliance on slapstick comedy before but found myself lapping it up this time around, at least some of my complaints around the story and characters have seeped away since then, and I feel like my appreciation of the show's visual elements has increased markedly in the interim. The result of all this is a film that I'd now give a cautious recommendation to anyone to at least consider watching - its narrative quirks and irritations do it no favours, but the atmosphere and sense of place the movie serves up shouldn't be underestimated.

Thus, if you're looking for an enjoyable period piece or simply want a good experience brought forth by strong animation and some interesting elements within its world, then Fusé might just be the film for you, provided you're willing to overlook its narrative shortcomings.

7
Elements of its story don't hold up, but Fusé's atmosphere and characters do enough to make for an enjoyable viewing experience.
LATEST REVIEWS