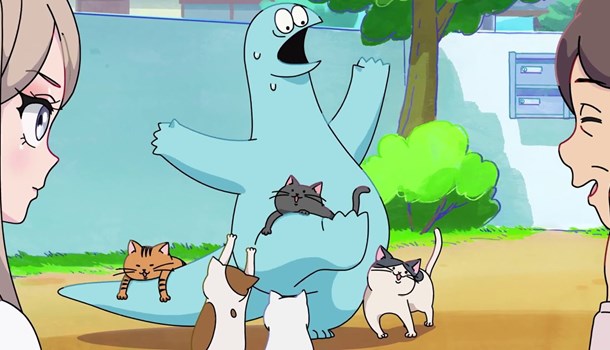 The concept of taking a regular human and pairing them up with an outlandish character has become a rather tried and tested trope in anime. We've seen dragon maids and helpful fox spirits paired with regular humans working regular jobs only to have their lives thrown into upheaval by the new presence in their lives. Gal & Dino takes a trendy gal who works at a convenience store and pairs her with a dinosaur. The dinosaur in question is a very cartoon looking example, as if they've been lifted straight from Foster's Home for Imaginary Friends and been dumped right in the middle of an anime. A big blue non-distinct looking blob that waddles around on two legs with his mouth always agape, as if all aspects of everyday life has him in a constant state of surprise. While other shows of this kind highlight some kind of relationship/friendship or other dynamic forming between the characters, there seems to be none of that here as Gal & Dino just seem to exist in the same space with nothing of note really happening. 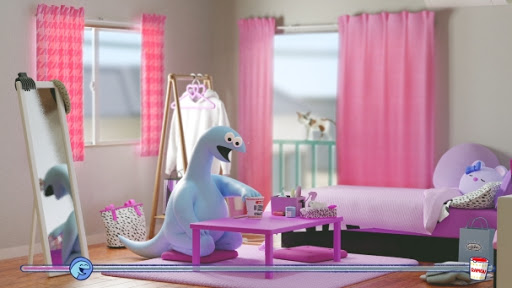 The show itself is a mix of various styles which switch from standard animation to claymation/stopmotion before finally switching gears to a live-action drama for the show's second half. The anime section is a collection of short vignettes with banal everyday events happening, such as Dino being afraid of cats, or the Gal's (Kaede) friend coming over to meet Dino so they can take selfies for Instagram. There's no plot as such, just series of everyday events. that really puts the "life" in slice-of-life. You'd think that having a dinosaur in the show would lead the way to comedic situations, misunderstandings or wacky bizarre adventures, but nothing of interest happens at all in the show. For a comedy that's got a dinosaur and a gal living together there is a distinct lack of comedy or urgency. The show really drags through its 24 minute runtime. This is really evident in some of the segments having a time bar along the bottom to remind the viewer how much of their time they've wasted watching this show. Each segment feels way too long and acts as a setup for a punchline that never comes. The process of watching this show a very tedious affair on the whole.

Other than the technical skill it took to make some of the segments there is nothing of note here for the anime section. 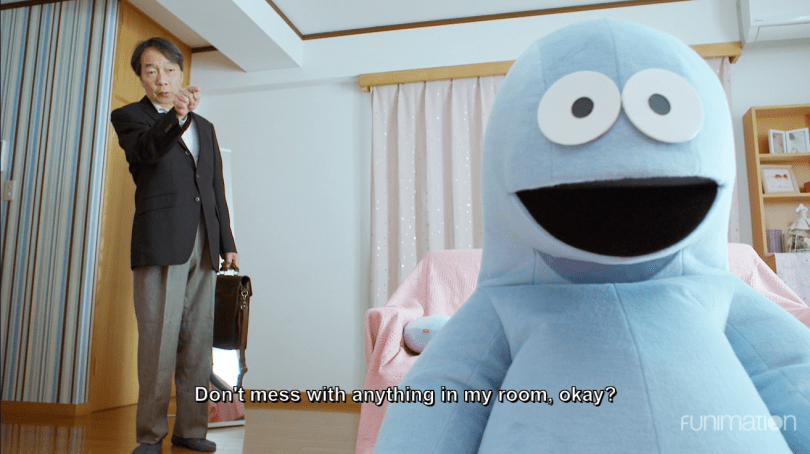 The live-action segments are where things get somewhat interesting. The first two episodes replace the gal with a middle aged man who works as an actor. Gal and this man celebrate Christmas together by eating cake. There are several odd things about these segments, with the most notable being the choice of sound effects. When Dino moves, he sounds like a lightsabres from Star Wars. When he approves or something good happens we get random air horn sounds. I'll admit these almost got me to laugh, just because of how absurd and out of place they feel. The oddest thing about these segments is the introduction of a sub-plot involving what appears to be a time travelling ghost dressed up in visual kei style. This part really had me scratching my head and was the only interesting thing that happened in the show.

The live-action segments would have been interesting on their own. The problem was I had to sit through 10-15 minutes worth of dull anime segments just to get to them. and even here the majority contain little of consequence until the final minutes which are full of weird nonsense.

This is a cheaply made show where nothing of interest occurs for the vast majority of it. In a nutshell Gal & Dino is boring.

The only positive thing this show has done for me was giving me the best night's sleep I've had since lockdown began - I watched the first episode at 11:30pm and went to bed straight after because I was so bored by it I couldn't be bothered to do anything else.

The anime sections should really be cut down to shorts. They go on too long, and having so many of these drawn out little moments piled up together really can wear down your patience. Having put up with three episodes of this this show I'm going to consider it the same as actual dinosaurs. Extinct.

Gal & Dino is streaming to the UK on Funimation Now

3
A show as dead the Dinosaurs