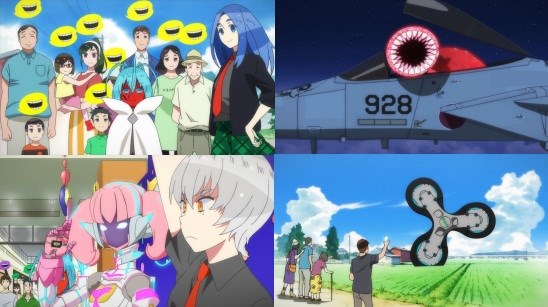 I want you to picture Snoopy (bear with me here). I want you to picture Snoopy from the old cartoon series doing his happy suppertime dance. That was me when Gatchaman Crowds Insight was announced. As you may guess from this and the scores for our reviews of the first season, we’re big fans of this show with its instantly likeable cast, crazy colour palette and the utterly unexpected depth of its high-concept plot. The question was, could it pull this off again?

Picking up after the events of the first season, we find ourselves in a world where the CROWDS system has become a factor of normal life and social network Galax (Facebook and Twitter wish they were a millionth as awesome as Galax) has become so integrated that the next election for the prime minister of Japan will allow votes to be cast online through it. But there’s a fly in the ointment in the form of red CROWDS users nicknamed VAPE, who are set on causing mischief with the ultimate aim apparently being to undermine CROWDS as a force for good. It’s a good thing then that Gatchaman are on hand to help out, with the newly suited-up Rui and newcomers Tsubasa and Gelsadra to keep matters from getting out of hand.

Two things became instantly apparent when sitting down to watch Insight. Firstly, if you haven’t seen the first series you haven’t a hope of getting through this as it drops you straight into the thick of things (I will say however that the director’s cut finale of the first season is not required viewing – it might provide some clarity to one or two points but nothing you’ll be struggling with by the end of the first episode). The second thing is that watching Insight, you immediately feel right at home with everything feeling just right with the world. It’s like entering a room you haven’t used for a while and finding everything just as you left it. The show is frankly great fun to watch and starts as it means to go on, with beautiful, dynamic action scenes interspaced with quirky drama and the brilliant ‘Biiiiiird Go’ moment with that music sting that makes you feel like a kid again. In terms of what’s actually new, the focus is fully on Tsubasa and Gelsadra, the show's two new members of team Gatchaman. Tsubasa proves to be an intriguing counterpoint to Hajime, combining a strong sense of what’s right with a youthful rashness that leads to a fair amount of conflict within the team, whilst Gelsadra and her ability to spawn emoticons above everyone’s heads then eat them seems set to become a big plot point later on in the show.

There are a few niggles however, in that the dynamic of the overall plot isn’t quite apparent yet despite some interesting concepts surrounding standing by your beliefs and the effects of removing social boundaries, but the series is very much awaiting the big lightbulb moment that season one had once the CROWDS showed up. It has to be said too that the current villain of the piece is a bit all over the place and lacks the disturbing, random evil of the Joker-like Berg Katze, and giving Hajime some more screen time would be nice too. But as I recall it took season one about four or so episodes to get going so Insight still has time to really get into gear.

Visually the series is still stunning. Kenji Nakamura may not have taken any other gigs in the two years since the first season of Gatchaman Crowds hit but he’s lost none of his flair and the series is everything you could want it to be. This is all supported by a top notch vocal cast who, whilst they may be busy (Maaya Uchida who plays Hajime is in a staggering eight series that are currently airing), are clearly putting their all into the show, giving it a huge amount of life and energy.

At this stage then it’s too early to determine if Insight is going to be a classic, must-watch series in the vein of the first season. Certainly we’ve all seen sequels to high-concept shows whose sequels are akin to that Stormtrooper who walks into the door frame (*cough* Psycho-Pass 2 *cough*), but the good news is that these opening episodes are great fun to watch and the pieces are certainly there for this to become every bit as great as we all want it to be.

You can currently watch Gatchaman Crowds Insight in streaming form on Crunchyroll.