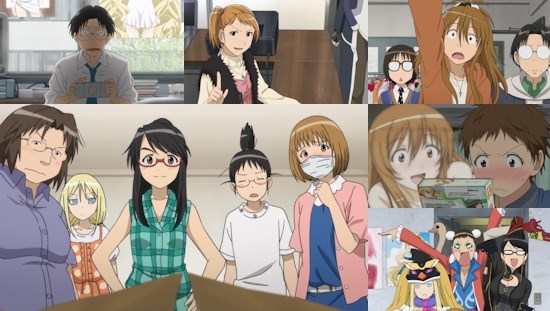 Shimoku Kio's Genshiken remains one of, if not the, most loved series about life as an otaku, but it's also a series that enjoyed a somewhat rocky anime adaptation - after an excellent first series, a switch in production studio for the second created an effort that never managed to live up to the fan's expectations. Now that Kio has returned to the Society for the Study of Modern Visual Culture to explore some different otaku proclivities while still spending a little time with the series' original cast, there was understandably some trepidation as to how its anime adaptation would fare, despite it being passed to a normally safe pair of hands in the form of Production IG.

Although many of its former members having now graduated and moved on the university's Genshiken club lives on, now with Ogiue at the helm, although you sometimes suspect that it's Ohno whose really pulling the strings as the club often seems to end up as more of a vehicle for her love of cosplay than anything else. However, Ogiue does at least hold enough sway to persuade her remaining fellow club members to let her hold a live drawing session when the time comes to attract new members, and this above all else proves to be a huge success, bringing in three new female members to bring a new lease of life to the club room.

Or rather, it seems as if they've attracted three new female members on the surface but one of those newcomers, Hato, isn't quite what she seems, as a wardrobe malfunction of sorts in fact reveals that... well, Hato isn't a girl at all, but a cross-dressing boy. This is the kind of revelation that most shows would play for outright comedy in that traditional "Haha, this boy dresses like a girl" fashion, but in fact Hato plays a major part in almost everything that occurs in this series and its treatment of his character, his back story and his motivations is sensitive and considered - when we laugh at Hato, it's not because of how he dresses but rather the circumstances surrounding it and the curiosity of the other club members towards this otherwise quiet fellow.

Knowing how to pitch its content is something that Genshiken Second Season really excels at - its primary focus is very much comedy and it never fails to deliver on that front, but it also knows how to present stories about its characters in a sensitive or even outright touching manner. This isn't a series that you might expect to move you to tears, but the closure of a long-running story (and by that I mean a story with deep roots into the original Genshiken series) regarding Madarame is utterly heart-rending in a surprisingly sincere way and perhaps one of the most raw, emotional moments I've seen in anime in quite some time. Although Hato, and later Madarame, take up a lot of the series in narrative terms, there's still enough room for all of the show's cast to grow to a greater or lesser extent, and long-standing fans of the series will also enjoy getting to see the older Genshiken members progressing in their lives, if only slightly.

If you are one of those fans who has watched the original anime series, you may be nonplussed or even outright frustrated by some big changes to the show's voice cast since those previous outings - how quickly you adjust to these changes will be a very personal experience dependent upon how attached you are to the characters, but some of the cast changes are incredibly jarring and take quite a lot of getting used to. This is most notable in Madarame's case, where his new voice actor offers up a great performance, but one that is entirely different in sound and intonation to the character you might know or love.

We can't ignore the show's comedy core of course, simply because it's unceasingly hilarious with lots of great one-liners, random anime quotes and parodies that feel smartly inserted rather than simply lazy grabs at humour. Add in some entertaining "spot the cosplay" contest which rears its head now and again and the appeal of the show to rabid otaku (like us!) is clear, but it's more of a love letter to those of us with such interests rather than an exploitative attempt to get us to part with our cash.

The comedy inherent to the series also brings us to perhaps the most surprising facet of this anime adaptation, that being that it's better than its source material. Kudos has to go to Production IG here for keeping the source material intact while still giving it a life of its own via tight direction and expressive animation that adds a whole additional layer of entertainment to the series even for somebody who has already read the original manga. It isn't something that can be said about an anime adaptation very often, but Genshiken Second Season's anime form would be my recommended way to consume the series over and above its still good, but less immediate, manga.

The other inevitable question about this series is "should I watch it if I haven't seen or read Genshiken before?" This is a tricky one for someone like myself who has consumed the series veraciously in all of its form previously, but I suspect the answer is a noncommittal "maybe" - the otaku humour should largely appeal to and hit the mark with anyone who has spent far too much time watching anime over recent years (and beyond), but some of its character-driven moments are really only going to resonate with those who have watched or read the original Genshiken to understand why certain developments are so important. Still, available as it is in streaming form you can at least watch the first few episodes of the series - if you find yourself befuddled as to who's who and why you should care, then you have your answer.

Although its focus is steady and true upon the hardcore otaku crowd and thus only really appeals to that demographic, Genshiken Second Season is a defining jewel in the crown of otaku-centric comedy - its comedy is unfailingly funny and really accentuated by the production values and direction of this adaptation, and it also knows how to make the most of the authentic character-driven drama and emotion of the cast when required too. If you had any worries about this adaptation not living up to its billing, you can dismiss any such concerns entirely - Genshiken Second Season is not only one of the best comedy shows we've seen this year, it's one of the best we've seen this year full stop.

You can currently watch Genshiken Second Season in streaming form on Crunchyroll.

8
Frequently funny, occasionally touching and one of the best otaku-centric comedies ever to grace the small screen.
LATEST REVIEWS