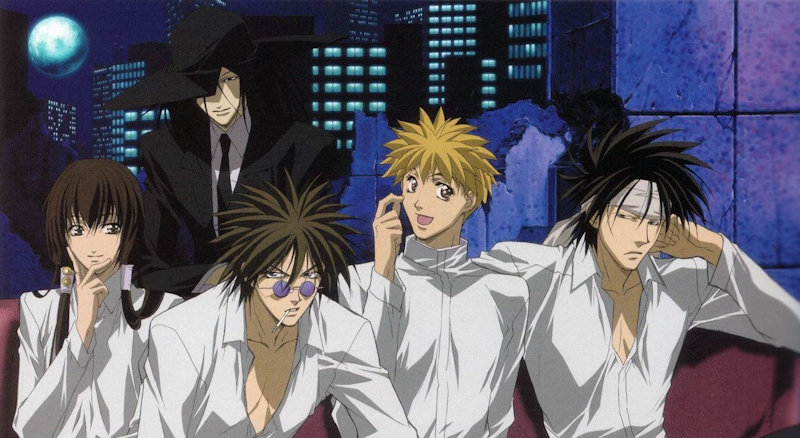 I wasn't expecting much from Get Backers. Until the DVD arrived on the doorstep I had never heard of it in any forums or chatrooms, and the front cover had some guy who looked like Basara Nekki from Macross 7, who is on my "top 10 most cretinous characters ever" list. Things did not look good.

The story itself concerns two guys, Ban Mido and Ginji Amano, the "Get Backers" of the story. They specialise in recovering stolen items, and each of them has an unusual power that aids their livelihood - Ginji can generate electricity, and Ban has the ability to create hallucinations in his victims if he can gain eye contact. There are hints as to the origins of these powers, but we can asume some explanation will be forthcoming over future volumes. This interesting idea didn't stave off my fears of an Inspector Gadget style comedic farce though...

Once the episode started rolling I found myself pleasantly surprised. The style was nice - not too cute, and not realistic enough to look ugly, the English voice cast were restrained and the two central characters were not as annoying as I'd feared. In fact, instead of a couple of hyperactive prats with over-enthusiastic "lets go!" attitudes, they were both very likable. Ban is quite the cold businessman with a mature outlook, and although Ginji treads the fine line between likable fool and complete nugget, he also has a past that keeps him grounded. The 5 episodes on the disc give us plenty to think about, from their initial introductory adventures through to the first plot-arc, we get to know quite a bit about both men and their dangerous histories.

Episode 3 introduces a rival team of "Transporters", containing some very interesting characters, some of whom share a history with our protagonists, others are just dangerous thugs. For early episode fights, these are quite brutal...

In summary Get Backers has proven itself one of the best DVD's I've watched in recent months. It has style, action and a plot you can't explain on a matchbox, making it a worthy addition to any collection.

8
An exciting and promising new addition to ADV's line up. All the signs point to great things to come in future volumes.
COMMENT AND DISCUSS
blog comments powered by Disqus