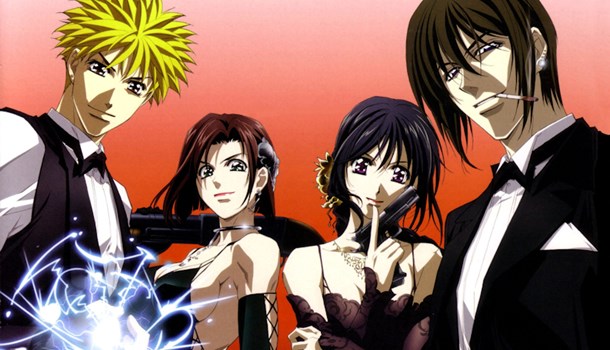 Get Backers surprised me with its first volume - I had expected nothing from it, but despite the buddy-comedy premise, it soon stepped up a gear, providing a slew of interesting characters and some truly inspiring (and brutal) fight sequences.

The following volume continues with the occasional odd job for the Get Backers, but foregoes them by volume three for an ongoing story arc, as both Ginji and Ban join forces with Lady Poison, Dr Jekyll and a few former residents of the limitless fortress, a towering construct in the centre of the city that's falling into decay, and home of some lethal and violent groups. The onslaught is insanely complex, with traps, double-crosses and a surprise around every corner.

I wasn't sure that the series was capable of pulling off an ongoing arc, and at times it seems to degenerate into a series of "versus" fight episodes that would be the perfect accompaniment to a beat 'em up game. Happily the creators have been creative enough to provide us with some interesting protaganists to go with some very memorable bouts.

The highlight of these discs is undoubtedly Dr Jekyll, the softly-spoken knife-weidling killer dressed in an undertakers outfit. Not only is he arguably the best fighter, but he steals every scene he's in. It's a shame he doesn't have his own series, because he has cult anti-hero written through him like a stick of Blackpool rock ^.^

That aside, the cast gel well throughout, and although there are times when you might wish the exposition to be a little less long winded, you're rarely left wacthing the clock.

So, it's surpisingly well written, imaginative and aimed at an adult audience, which gives it a welcome edge. Okay, it has amazingly poor music, and the animation is functional at best, but the designs are sharp, the English dub is nicely done (though a little tinny in places) and as a whole the series hangs together well. If you like action anime with a little more brains behind its brawn, Get Backers could well be a series for you.

8
An action anime that should cater to most crowds.