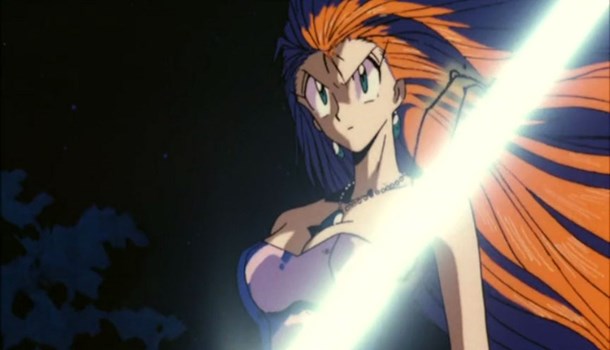 Hot through the letterbox, Ghost Sweeper mikami is the tale of an agency dealing with the Supernatural. Headed by a hot redhead with a nice line in short dresses, its an action adventure in the Phantom Quest Corp/Devil Hunter Yohko mould which was incredibly popular back in the 90's, before Buffy arrived and gave us a real woman to lust after ^_^

Mikami herself looks like a Sailor Moon villain, so seeing her as the heroine is actually a bit unsettling, but the plentiful fan service should get you over that hurdle. The basic premise is that Nosferatu has reappeared, bringing with him a spider-like accomplice that causes no end of problems for Mikami and her crew of social misfits, not least because he's turning the denizens of her fair city into zombies. Mikami is offered a potload of cash to stop him, but other hunters are also after the loot and the DVD has its sites set on farce all the way.

This DVD is set after the TV series, which gives us a slight problem in as much as people new to the Ghost Sweeper universe are going to get a little lost as to who everyone is. Like Patlabor before it, the Ghost Sweeper DVD can be viewed as a stand alone feature, but those familiar with the relationships of the characters will get far more out of this than the rest of us. However, unlike Patlabor the relationships aren't actually all that complex, (Mikami: loves money. Tadao: horny lech) so you can amble into this completely unaware and still enjoy it. The inclusion of character profiles in the DVD extras will also help bring you up to speed, and are recommended viewing before watching the main feature.

Animation quality is average at best, with the English dub just about bearable, but thankfully the Japanese dialogue is still available, and I'd recommend that option even if you lean towards dubs - you're more likely to watch it to the end that way.

The stylistic bent of the series doesn't really suit animation all that well, and having seen some of the manga as I researched this, it really does look better on paper. That said, for people after demon hunting comedy, the DVD ticks all the right boxes, even if it doesn't add up to an impressive result.
5
Nicely packaged and an energetic romp, but it screams average all the way through, and there are better Manga DVD's crying out for attention. Read or Die anyone?