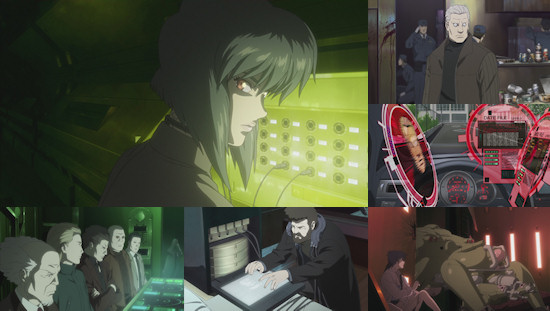 It was back in the summer of 2007 that we first got to take a look at this feature-length outing of Ghost in the Shell: Stand Alone Complex, and it's perhaps telling that even five years later our love of the series hasn't diminished at all, leaving us hungry for more.  We clearly aren't the only ones either, and after that long break Solid State Society returns to the UK, this time sporting a DoublePlay package which includes the film on Blu-Ray as well as DVD for the first time on our shores.

Set two years after the climax to the second series proper of Stand Alone Complex, Solid State Society rejoins a Section 9 trying their best to cope without their mentor and most accomplished operative, Motoko Kusanagi.  This is understandably proving to be a difficult task, and the challenges they face really come to the fore as a series of decidedly suspicious suicides begin to manifest themselves - events which all seem linked to an individual known only as "The Puppeteer".

With the scope of their investigations widening to include terrorist groups, missing children and automated systems to care for the elderly, it's clear that this particular rabbit hole is a deep and cavernous one - no wonder then that it's also attracted the attention of the Major herself, as she sets about investigating the incidents under her own steam.  As the two investigations converge, the stakes grow higher as Section 9 and its employees come to the direct attentions of the Puppeteer, meaning that the race is well and truly on to stop their schemes before they escalate too heavily.

Essentially, Solid State Society is "just" another Stand Alone Complex story arc given a singular, feature length focus stripped of the stand-alone incidents which punctuated its two TV series - although I say "just", this is no bad thing, as the stellar quality of story-writing and characterisation inherent within the franchise shines through once again here.  As is par for the course from this series, the film is a perfect blend of science-fiction elements, occasional dips into action territory, and plenty of social commentary - this film in particular examines the plight of Japan's declining, ageing population and what that means not just for the elderly, but the country's youth to boot.  As a whole, Solid State Society is both intelligently written and delivered, getting under the skin of its main characters (in particular Kusanagi, Togusa and Batou and the relationships between them) while still finding time to deliver a thoughtful examination of some of the particulars of its setting.

In terms of this Blu-Ray outing for the film, despite being a native HD release this isn't perhaps the most striking Blu-Ray transfer you'll ever see - it's an undoubted improvement over the original DVD release but not a massive one, which may give pause for thought amongst less dedicated Ghost in the Shell fans.  Still, video quality is pretty good overall, and the Blu-Ray is packed with interesting extras for aficionados to enjoy and appreciate as per the original two-DVD release of the film.  Audio quality is similarly solid, with a very good English dub complementing the original Japanese audio (not to mention Yoko Kanno's engaging soundtrack) to suit your particular preferences.

If you never picked up Solid State Society the first time around, then this DoublePlay release of the movie is an absolute must buy for anyone who has enjoyed Stand Alone Complex in the past - it probably isn't a suitable introduction for newcomers to the franchise given its reliance on prior events to lend it some gravitas and mystery, but if you're up to speed with the show's TV anime outings then this is a fantastic continuation of the story that leaves us hungry for even more.

For existing owners of the film, whether this is a worthy purchase is a slightly trickier proposition - video and sound quality is improved but won't blow you away, and its roster of extras is the same as the initial DVD release, so the only real question is how dedicated you are to the Stand Alone Complex series and whether owning the film on Blu-Ray will spur you on to rewatch it.  If an excuse were needed to watch Solid State Society again, then this is surely a perfect reason to do so.

8
The leap from DVD to Blu-Ray isn't a massive one for this movie, but Solid State Society remains a great example of what the Stand Alone Complex franchise is capable of in terms of intelligent story-telling.
COMMENT AND DISCUSS
blog comments powered by Disqus