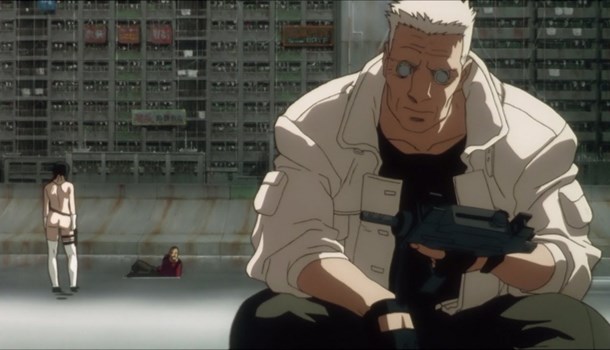 It's only been a few weeks since we discussed the DVD release of Ghost in the Shell 2.0, the 21st century re-release of this seminal classic complete with a fresh coat of proverbial paint - Fellow reviewer Seb did a fantastic job of summing up everything that is good and bad about this new version of the movie in his own review, so if you want to know more about the film itself then you'd be well advised to have a read-through of his review.

However, another interesting aspect of the Ghost in the Shell 2.0 story in terms of its UK release is that it's available in both DVD and Blu-Ray variants, so our purpose for this particular review is to discuss in a little more detail what the Blu-Ray release of the movie has to offer.

Obviously, the major selling point of any Blu-Ray disc is getting to watch a movie you enjoy in all its High Definition glory, so let's start out by talking about Ghost in the Shell 2.0 itself in glorious 1080p.  This is actually an interesting discussion in itself due to the very nature of the movie and the way it switches from remastered scenes using the original animation to brand-new CG sequences, while also blending the two on occasion.  If the switch between CG and the film's original animation is jarring on DVD in places, then it becomes even more so with the switch to High Definition - The opening sequence of the Major's skyscraper dive is absolutely sumptuous visually on this disc, with a tremendous amount of detail on show right down to drops off rain running off Motoko's body that you'd be hard pressed to spot on the DVD transfer; however, this only serves to accentuate the return to the original 2D animation and just how out of place those new 3D sequences look.

Thankfully, the more positive news is that regardless of these juxtapositions of old and new, this is generally speaking the best-looking transfer of Ghost in the Shell yet.  While the original animation isn't ideally placed to make the most of a High Definition video format, it still offers up a clean and largely noise-free viewing experience.  Unfortunately, some scenes seem to have benefited from the remastering process better than others, giving a slightly "uneven" feel to the quality of video on offer as the film progresses that is noticeable on the Blu-Ray release where perhaps the limitations of the DVD format hide it, but overall given a choice of the two formats there can be no question that the Blu-Ray release of Ghost in the Shell 2.0 is the one to watch.

This feeling is also confirmed when it comes to the audio quality of this release - While the DVD's Dolby Digital 2.0 and 5.1 soundtracks are no slouch, they can't match the fantastic range and power of either the 6.1 DTS Master Audio or the 2.0 uncompressed PCM audio tracks (both available in either Japanese or English) offered by the Blu-Ray release, which really make the most of the remastered and re-recorded audio to bring everything from that haunting opening theme onwards to life.

Of course, the Blu-Ray release of the movie has one other string to its bow - The inclusion of the original release of the movie on the same disc.  Excited at the thought of seeing the movie we know and love in its original form in High Definition, I couldn't wait to check this out... and was summarily disappointed.  While I wasn't expecting this release to be given the same treatment as Ghost in the Shell 2.0 itself, I was at least hoping for something better than the rather ugly and shoddy looking transfer supplied here, which isn't even up to the standard of the remastered DVD currently in my collection.  I was planning to give away my DVD copy in lieu of this new Blu-Ray release, but actually watching the original movie transfer included here has all-but changed my mind - Better-looking subtitles aside thanks to the capabilities of the media, it simply isn't as pleasant to watch as my older DVD release.  While it isn't terrible to the point of being unwatchable, I can't shake the feeling that so much more could have been done with this, but alas it simply wasn't to be.

Still, if you really want a copy of Ghost in the Shell 2.0, then this Blu-Ray release really does show off this new version's changes to their fullest extent - Just don't pick it up solely to replace a perfectly good DVD copy of the original movie that might already be in your collection, or you'll probably feel a little short-changed.

8
As we've discussed before, it's still Ghost of the Shell at the end of the day, but a better transfer of the original movie would have made this a far more compelling release.
LATEST REVIEWS