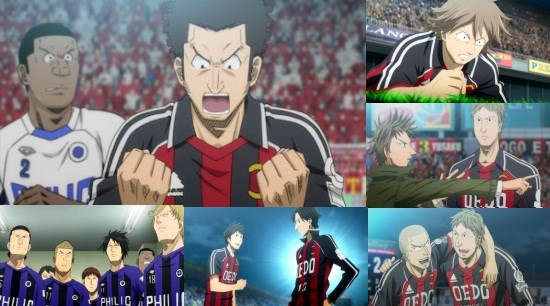 The World Cup has come and gone, those depressing days of no football on TV has passed, and a new season of thrills and spills have begun yet throughout all of these periods, there has been one constant source of entertainment for fans of both anime and soccer alike - Giant Killing.

The first half of Studio Deen's manga adaptation proved itself to be wonderfully adept at capturing various facets of the game as it followed the fortunes of struggling East Tokyo United and their new much-touted manager Takeshi Tatsumi, and given that early success it's no surprise to find that little changes as the second half of the show kicks off - after taking an episode to luxuriate in ETU's big victory that closed out the first half of the series by following the excitement of both fans and the club's PR department, we get straight back into the thick of things as a team with renewed confidence starts to strut their stuff on the pitch.

As we move onwards throughout the season, we're greeted by the return of an injured striker named Yotaro Natsuki, which also sets up a lot of the more personal drama as the show continues, with the "newcomer" looking to force his way back into the first team while Sera, another regular striker, suffers a crisis of confidence.  Although the personalities of many of the players (be they ETU members or otherwise) are very much larger than life, they do tend to echo the kind of personalities you expect to see on an actual football field, keeping some level of realism while avoiding the pitfall that most real players are hugely dull to converse with.

Again in keeping with the first half of the series, we eventually find ourselves building towards a massive game for the club, this time against an Osaka Gunners team that has been running rampant with their free-flowing attacking football.  With ETU expecting to be cannon fodder for such a side, it's up to Tatsumi to come up with a plan, and this he does, before we get to watch it swing into action in almost real-time, with twenty in-game minutes often filling an episode.  This unusual and occasionally sluggish pace can threaten to become frustrating (not helped by some of the most agonising cliff-hangers ever devices between episodes), but the eventual pay-off is more than worth the long build-up, so you can hardly blame the producers for keeping their powder dry so that they can unleash a couple of episodes of fireworks later on.

Although sports anime are naturally not for everybody, and Giant Killing will be appreciated most by football lovers who enjoy immersing themselves in tactics and the kind of man-on-man battles that occur even within a team-oriented game, it's really worth a look if you're even vaguely interested in the kind of character-driven stories that the series has to offer.  Even if you're not a big fan of the game, Giant Killing won't baffle you with jargon or nuances of the sport, leaving you to enjoy the other aspects of the show relatively uninterrupted.

Of course, it's the footie fans that will really draw the most from the Giant Killing experience as a whole, and I defy anyone who loves the sport not to find themselves leaping from their chair when ETU score, or bemoaning a poor refereeing decision as though you were watching the real thing.  Giant Killing is genuinely that immersive, and I'm not sure that any other football-based series will ever be able to come close to its all-encompassing view of a team, its fans and backroom staff, and the symbiotic relationship between them all.

8
An entertaining but exacting series that encompasses everything that modern football is about.
LATEST REVIEWS