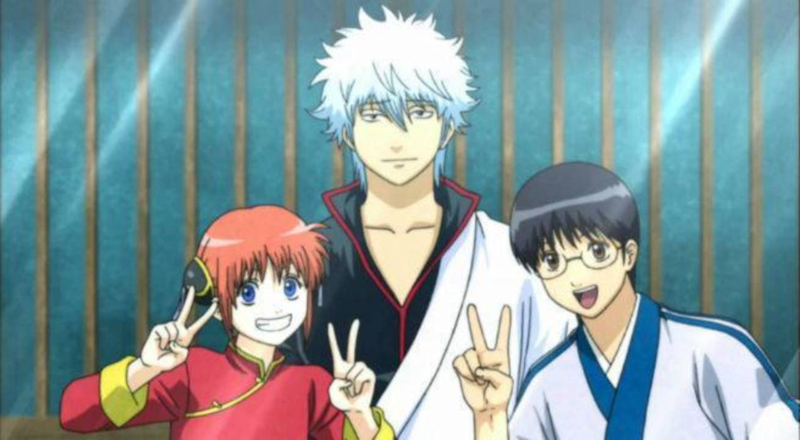 Distributor
Crunchyroll
Certificate
N/A
Price
N/A
Date
03 May 2011
Gintama is a strange show for me to review, for a multitude of reasons. First and foremost, Gintama is nowhere near a "new" show - what is being shown this season is its "fifth" series (according to Crunchyroll) and the anime has just over 200 episodes under its belt at this point. Two hundred! That's a big number! Another reason why this show is strange for me to review is that I am neither a stranger to the show, nor am I anywhere near up to date - I have seen the first 20 episodes and a few select episodes after that. That’s a lot of background I am missing! Also, as previously mentioned in my review of Nichijou, comedy is a highly subjective beast. But aside from all that, does Gintama measure up?

In short - hell yes. For the entire time that I watched these three episodes I had a smile on my face and I lost track of the amount of times that I cracked up laughing. The main reason behind this show's success is its sheer variety and density of gags - while not all of the jokes will provoke a laugh, enough are hits that you forget about the misses and have a good old time. The variety in particular is a massive boon - the show blends together sight gags, straight man/idiot partnerships, references, character humour and much more, all covered in a thick layer of self-referential and meta jokes. In a medium where it’s not uncommon to find comedy series that tend to lean almost exclusively on one format of joke (especially those that lean on references), this breadth of approach is more than welcome. The shows cast of (quite literally at this point) dozens really helps in this regard as nearly every person is unhinged in some amusing fashion - even the supposedly sensible ones are dumbasses in their own way. The sheer amount and concentration of characters means that events inevitably get out of hand no matter what the original problem was, causing the show to go free-wheeling so far off into the depths of insanity that even the cast themselves break the fourth wall to exclaim in horror at how out of hand things have gotten. Needless to say, if meta humour or breaking the fourth wall makes you want to throw things then you may want to give this series a miss.

Naturally, having skipped around 180 episodes, I have personally missed out on quite a few character introductions - by way of illustration, half of the OP is filled with characters I had no idea existed. I was initially worried that the show would expect me to intimately know who all these mysterious newcomers were, but these first three episodes have done a great job of getting me caught up with the cast. The majority of the characters aren't that complex to begin with, and the introductory two-episode storyline, based entirely on the 4th wall breaking premise that the show has been off the air for a year, was a very well disguised catch-up. The setting is also very easily to digest and not particularly important - in the recap at the start of this new series the cast breaks in an interrupts the narration, exclaiming that it is a “waste of time to worry about the context!” In short: the series is set in an alternate Edo-era Japan where aliens invade and take over, bringing advanced technology with them. This allows the show to get away with whatever gadgets or anacronisms are desired by the plot and the jokes without spending five minutes explaining where it all came from every time.

Even with this great two-part storyline to ease you back into things, I would not recommend starting with this new series if you haven't seen any of Gintama previously as it assumes that you know the core cast of characters at the very least. Watching, or at least skimming through, the first 13 episodes or so of Gintama (also available on Crunchyroll) should arm you with the basic knowledge you need if you are eager to jump into the latest episodes. If you have already watched and enjoyed Gintama, then feel free to rejoice as this is yet more of the show you already know and love, if perhaps somewhat sharpened and honed by its time off of the air.

The art in Gintama is nothing to write home about, but it does put in the time and effort where it is most needed. All of the characters are well designed and are identifiable from a hundred paces even when they are pulling strange faces, which is a massive help when the cast are such a massive part of the humour. The sound design, in particular the effects, are also very well designed and greatly add to the impact of the jokes. As a person who prides himself on enjoying funny animated faces and goofy sound effects (even though I probably shouldn't) Gintama scores major points with me.  The opening and closing sequences are also very well made, and this is coming from someone who habitually skips them, no matter the show.

As a returning series, Gintama succeeds marvellously. I snickered, I laughed, I chortled, and I exclaimed "What the hell?" more than once.  I enjoyed these three episodes so much that I am eagerly looking forward to what is to come, and am also looking at going back into the vault to catch up on the 180 or so episodes that I previously missed.
You can currently watch Gintama in streaming form right here at UK Anime Network.

9
Comedy gold, instantly accessible to everyone but complete newbies of the show (who should give the series a shot anyway!)
COMMENT AND DISCUSS
blog comments powered by Disqus