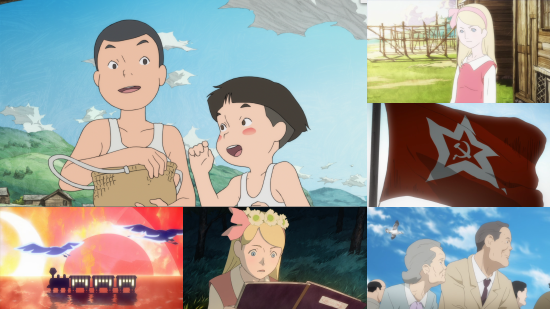 War is a tragedy; a tragedy that impacts everyone from the soldiers fighting to their families and the innocents that happen to be caught up in it. When war is over and one side is ultimately victorious over another, the tragedy doesn’t stop. To the victor goes the spoils, and with the cessation of hostilities and the Japanese surrender at the end of World War II the spoils in this case included the seizure of Japanese territory north of Hokkaido around the sea of Okhotsk by the Soviet Union. At the end of the war, the lives of the people of the island of Shikotan changed forever when they were subjugated and absorbed into the Soviet Union, and their lands and property seized at gunpoint. This wasn’t an unknown event amongst all the turmoil following the conflict, but the story of Junpei, Kanta and their family and friends as they survive this adversity is one which will not fail to tug on every fibre of your humanity.

Having now lived on an island in the middle-of-nowhere (that being the Falklands), I can understand a bit more the sense of community that comes from living and surviving together, but back in the war-torn 40s life was much more basic, though possibly more fulfilling. Life on the isle of Shikotan wasn’t exactly easy, with the main sources of income being the ocean and agriculture. Junpei and Kanta grew up with no running water, no electricity and living in what some these days would describe as poverty. Following the US raids on Hokkaido and the cessation of hostilities, the archipelago became a key strategic asset for forces in the area. What was once a pleasant island life became more difficult with the arrival first of the Soviet garrison who took over control of the island, and later with the arrival of their families as the island was transformed from a Soviet stronghold into a colony.

The Soviets brought with them some luxuries - electricity, food - but these were meant only for their people. They forced the indigenous locals out of their homes and into outbuildings, while properties were converted into dwellings more suitable for the Soviet culture. In schools the traditional songs were overshadowed by Russian cultural classics. Surely the traditional Japanese culture couldn’t survive this onslaught? This is the thing though: humans are stubborn. If you try and eradicate someone’s beliefs or culture, they will fight back. If you try to drown out their music with your own, expect a retaliation. On this island, where two people met and were forced to become a community, a conciliatory position was achieved. Both Soviet and Japanese learned to cohabitate and co-operate, and this could easily be seen by the growing relationship between the young Junpei and the daughter of the Soviet Commander, Tanya.

This is the part of the story which tickled me the most; the way in which these two young people met despite cultural animosity and a language barrier to become close friends, and possibly more were they allowed to grow up together. However, Tanya’s family position and the responsibilities that Junpei had due to his family, with his father being the lone survivor of the former Japanese defence force who held the island against their enemies. Junpei, burdened at times by his younger brother Kanta, tried his hardest to assist his father, uncle and teacher who were all trying to help the starving Japanese families on the island, but was torn apart when his father was taken prisoner by Tanya’s father and vanished to a prison camp. Soon after, the remainder of the Japanese families were forcefully removed off the island to another Soviet territory for housing and processing prior to repatriation by Japan. Junpei and Kanta, in the care of their school teacher and uncle, left the island, leaving their homes, their frail grandfather and Tanya behind.

The makeshift family fought to stay alive through adversity until the day Kanta heard about their father being held in a “nearby” prison camp. Insistent on seeing his father, the family then left to try and find him. After being pursued by Soviet forces, and braving the fierce Northern Pacific winter, both Kanta and Junpei managed to see their father incarcerated one last time before the repatriation of the surviving members of this family back to Japan took place.

The above is perhaps the coldest and most clinical summary of the story of Giovanni’s Island that I could produce. This is not without reason. Not since the tragedy that was Grave of the Fireflies have I been so moved by the storytelling and characters in a motion picture set in this time period, and to go into more detail at this point would be to sully the storytelling. The trials that Junpei bears as he is forced to say goodbye to those he loves one by one is heartbreaking, but it was the story of his teacher Sawako that touched me the most. Sawako was an informal partner to the boys’ father and escorted them the entire time she sought their father and protected them during their escape from the detention centre. Her conviction and strength was touching. Giovanni’s Island left me an emotional wreck.

The film makes regular references to a novel called the Night on the Galactic Railroad written by Kenji Miyazawa. This novel is the favourite of the family, with the boys learning it from a young age. It was used as a device by the father to connect the boys’ to their dead mother, and as the film progresses it becomes a mean to connect Junpei to Kanta, his grandfather and his father, as it is said that the galactic railroad connects one with their loved ones who are far away, even in the afterlife.

The film’s production is beautiful. From the way that the scenes are constructed to the writing, the characters and most of all the animation - all of it is, in my opinion, excellent. While at times crude and almost comical when it comes to the children’s expressions, it fits the mood of the scenes well and is punctuated with hand-drawn backgrounds which are lush and vibrant.

I am a softy when it comes to crying in films. It happens a lot. What I am not used to feeling is like an empty shell, devoid of any fluids capable of being expelled from my tear ducts. Whereas Grave of the Fireflies was traumatic and shall never be spoke of again, I was left touched permanently by Giovanni’s Island and the emotion that was conveyed. There is a reason why certain scenes within this film were selected as amongst the best in our UK Anime 2014 Awards, and unfortunately I was unable to vote as I had not seen the film. I regret that decision now, having seen the scene in question - it's simply beautiful. However, I doubt that this film will retain its emotion on multiple screenings. The element of uncertainty and of tragedy carried the story forward, and I personally believe that this is a film best saved for archival viewing - to be relived when the memory has faded and needs to be refreshed. Whether I will re-watch Giovanni’s Island again, I simply do not know, but if I do, I still bet that I will be left a blubbing emotional wreck by the end once again.

Alongside the powerful film itself, there is also much to be said in positive terms about the film's Ultimate Edition presentation, which compiles both the DVD and Blu-ray editions of the film in a Digipak case and hardcover box, and also adds in an additional book that can only be lauded for its comprehensive nature. While other premium editions from Anime Limited have been more about the visuals in their included books, Giovanni's Island is more about its textual content, containing plenty of salient information about the history of the film's setting, its reallife inspiration, and of course plenty about the various staff that worked on the film. If you're interested in the context and period of the movie (which surely you will be to watch the film), then the enclosed book is invaluable and worth of the asking price of the Ultimate Edition alone, thanks also to a presentation that makes it feel like a valuable part of the package rather than an afterthought.

If we were to make any negative comment about this Ultimate Edition, it's the lack of the film's title on the spine of the outer box within which its contents is contained, which is going to make it look odd on your shelf if you stack it normally - a minor complaint for an otherwise marvellous and invaluable addition to your anime collection. As Seb mentioned, this may not be a film you'll want to watch again and again, but it's worth owning and drinking in at suitable intervals as a reminder of the best and worst of humanity in a single effort.

English and Japanese 5.1 audio with English subtitles. On-disc extras consist of a "Making of" feature, an interview with Polina (the voice actress for Tanya in the film), a full version of the Russian “Troika” Song and an art gallery.

10
A tragic and emotional tale of a family’s turmoil in post-war Japan.