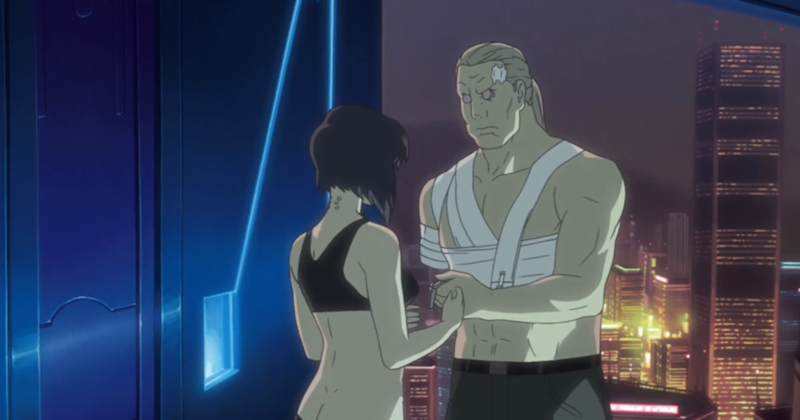 Distributor
Manga Entertainment
Certificate
15
Price
£19.99
Date
05 Feb 2006
Just saying the name Ghost in the Shell (GitS) brings up images and memories of the Major, those cheeky little Tachikoma and of course the infamous image from the 1st Gig, the Laughing Man symbol. While some films have become classics, GitS has ballooned into a franchise and pretty much written itself down into anime legend. With all this pressure, the 2nd Gig of the TV series spin-off Stand Alone Complex has a lot to live up to. But as Ross has shown in this review of the first volume, this 2nd Gig meets all the requirements of the GitS legend and actually seems to add more to it and this second volume is no different.

Section 9 are having a hard-time keeping up with recent events, especially when they are being pulled about everywhere. The team isn’t happy about being errand boys for the new Prime Minister, as well as being put onto baby-sitting jobs and investigating cases that the regular police should be looking into. But things are starting to come through the dirt and grit of these everyday jobs and there is a lot more going on starting to come to light.

What can be said about GitS: Stand Alone Complex that hasn’t been said before? In this volume, the production values are kept up to their usual high standard, and you’ve just got to love the new intro complete with quite a kick-arse soundtrack.

Section 9 and the viewer are given more pieces of the jigsaw and more information is given about the Individual Eleven and what they are planning, but you're always kept guessing as new and puzzling information is released. Clearly, the mysterious and consparatory nature from the first series has been inherited by its successor. It’s the thinking fans anime and is always clever and intelligent making sure to make the viewer think they are part of the investigation rather than just an observer.

While volume 2 is quite serious it’s the wonderful little Tachikoma and their high-pitched child like voices that come in every so often to help lighten the mood to give you a little giggle. Even the Tachikoma Days mini episodes at the end of each episode provide a little smirk and giggle with their daft adventures. While many would say its off-putting to have that kind of comedy element, its this comic relief that helps the series from being too heavy and brings more life to the story.

Volume 2 of GitS: SAC 2nd Gig adds to an already impressive series. Fans of the 1st Gig will love this new volume and series, while those that passed on the 1st Gig may find more to latch onto here. To miss this would be an injustice to yourself as an anime fan.
9
2nd Gig is shaping up to be as much of a classic as series 1.
COMMENT AND DISCUSS
blog comments powered by Disqus