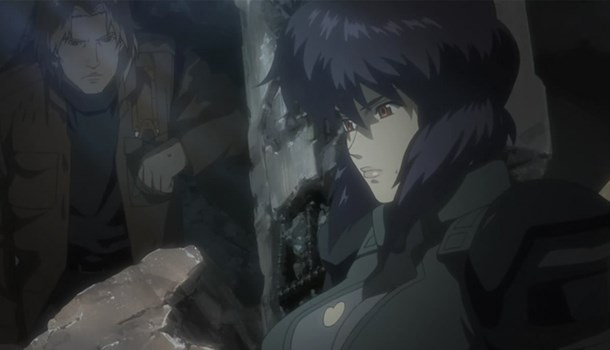 I've always felt oddly at ease with GitS. On paper it's not an anime I would go out of my way to watch - it's a futuristic crime drama, and I hate crime dramas (far too many of them in my opinion, and all about the same bloody thing). Secondly it's full of Star Trek style technobabble that I can't make head nor tail of.

But good Lord, it's entertaining!

Volume 3 continues the tradition of bite-size episodes featuring the investigations of Section 9, all featuring an underlying narrative which has more twists and turns than a very twisty-turny thing.

The episodes featured on this disc are mostly concerned with the Individual 11, the terrorist group that targets relations between the native Japanese and the refugee camp on its borders. Both Togusa (the mullet-haired-non-cyborg) and the Major are particularly well served with this disc, each gaining an episode to themselves.

In Trial, Togusa is held in custody for assaulting a heavily implanted male suspect whilst attempting to save a fleeing woman. The ensuing trial has shades of A Few Good Men as facts are twisted to serve a political agenda, and even though the narrative gets a bit hard to follow, the court scenes themselves are always edge-of-your-seat thrilling.

Affection is a low key delight. Whilst field testing new candidates, Motoko is drawn into a strange world where a memorabilia shop contains artefacts that store precious memories for their owners. Among the collection is Motoko's cybernetic child body, and we see a tantalising glimpse into her past, as well as a possible (and subtle) hint that one of her colleagues may have met her before.

The other episodes deal more directly with the terrorist threat posed by the Individual 11, and advance the plot nicely, but for me, its the aforementioned pair of episodes that set this disc alight.

As ever, the voice acting is superb. Convincingly played and never hammed up, but purists have the usual Japanese language original and subtitles too.

Extras include a pair of interviews with the animation director, and series director respectively.

Those of you hooked on the tales of Section 9 will doubtless buy this anyway, and those yet to be converted won't feel lost with this collection, but would do well to start from the beginning.
9
Cutting edge animation, adult storylines and gripping entertainment.