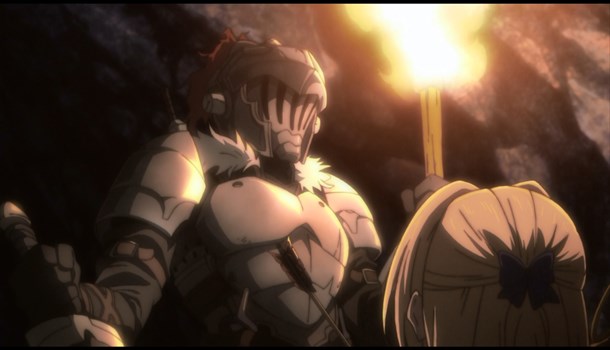 Goblin Slayer is a dark fantasy action series, released this season, revolving around the titular Goblin Slayer, an adventurer who mainly takes quests that revolve around Goblin extermination. [Ed – A rather suitable name I think…]

The story begins when a priestess on her first adventuring quest, joins a party and everything goes horribly wrong. The party is wiped out and the priestess is the only survivor and having been saved by the Goblin Slayer, she joins him on his adventures from now on.

Before the review can properly get started we need to address a major issue with the show that has been a point of discussion regarding it since it first started airing. That is the very explicit and distressing content in the first episode. Specifically, regarding the means of the priestess’s survival. For the purposes of this review and discussion I'm going to talk quite openly about the content featured. If you don't want spoiled or don't want to read about this distressing aspect of the show, please skip the next paragraph.

Goblin Slayer starts things off with its first episode by showing the folly of an inexperienced adventuring party that are way in over their head in the worst way possible. This is done so to contrast how experienced and adept the Goblin Slayer is when compared to the fledgling adventurers, how cunning and ruthless goblins can be and mostly in order to get the viewer to hate the goblins in the show so that they won't feel any positive emotions towards the goblins when they are being massacred en-masse.

Things go wrong from the adventurers from the start of their quest. After being ambushed in the cave, one member is poisoned and euthanised by Goblin Slayer [Ed - Being named after your job is all well and good until you meet Cholonic Irrigator] as there is no hope for her to recover, another member is beaten mercilessly to death. But worst of all is what happens to the female fighter in the group.

After putting up an initially good fight against the goblins a hobgoblin arrives and overpowers her. Resulting in the remaining goblins in the area ganging up on her and sexually violating her. This is a very traumatic scene, we don't see explicit details, but we see the lead up to the act and also hear screams of anguish in the background as another character runs away. First of all, regarding this scene, I was very disturbed and disgusted by it. It is a very horrible thing I've seen done in other anime as well to more extreme degrees (Berserk Movie 3 is one example) as much as I understand why medium includes these things, I'm never a fan or approve of them when they are done. That being said I can understand why this sort of thing is included. The act in general is one of most horrible acts that can be done to a person. From this it is almost impossible to empathise or even show sympathy to a character that does this act. So with regards, the series is successful in getting the viewer to hate Goblins, even if it has used rape as a plot device.

With regards to the establishment of Goblin Slayer as a character; his introduction and the subsequent episodes show him as a rather unconventional protagonist especially in a fantasy adventure show. For starters Goblin Slayer has no interest in any kind of quest other than hunting goblins. His equipment is old, rusty and usually stinks of blood which draws ire from his fellow adventurers. He's a high-ranking adventurer but takes jobs that many adventurers would see to be beneath him, he is stoic and keeps to himself only really speaking with the guild receptionist to ask about quests and report in after a successful hunt. There are other characters he starts to converse with seen throughout the show; a childhood friend whose home he stays at, the priestess who now accompanies him on quests and a few other adventurers who he travels with during one quest. The Goblin Slayer while being looked down upon by other adventurers in his home town has some renown elsewhere. From this we the Goblin Slayer is a character who doesn't care for honour or glory he just wants to kill as many goblins as he can.

We see his approach to this a very methodical one showing just how prepared he is for any situation involving goblins and how experienced he is in fighting them. His approach is even admired by other characters when they witness first hand his methods and techniques for dispatching goblins. What many people see to be his weaknesses are actually his strengths. His armour is old and blood stained on purpose as Goblins can smell the metal and fabric of new armour, meaning that he is better able to sneak into their lairs. He doesn't buy new weapons as he goes through them too quickly to justify the purchase. Instead he scavenges replacements from the goblins he kills. All of these show his resourcefulness and just how dedicated he is to killing goblins. This makes a stark contrast from other shows in how they handle the motivation of a character in wanting to fight an enemy. In other shows the main enemy is seen as a constant threat that needs people to fight against. Most people within the world of Goblin Slayer don't see them as that big of a deal compared to other monsters [Somewhat bafflingly given how formidable they keep being – Ed] so leave them to lesser experienced adventurers to deal with. Goblin Slayer has a deep seeded hatred of them. Yet somehow kills them in a rather calm methodical manner.

With regards to action, there is plenty of it. At first mainly showing Goblin Slayer sneak up behind goblins or overpower them in creative ways. There is one episode where a group of adventurers take on a bigger opponent which showcases the creative skills the characters posses. Also it doubly acts as a way to explain how magic in the series works. Only certain characters who have divine blessing can cast magic. Each have spells that are bestowed on them as miracles that can only be cast a certain amount of times each day. This puts a limit on magic meaning that characters have to use it sparingly or come up with creative ways to use it. We also see this done with the goblin slayer making a suggestion to the priestess on how to use one of her spells in a way she didn't think possible and the same with a scroll he carries. A very good example of how to do believable in-depth world building.

In Goblin Slayer, adventuring is just seen as a regular job to most people. It’s quite odd seeing this type of work not being glamorised like other shows do. Instead Goblin Slayer focuses on the harsh cruelties of this line of work, mainly in its first episode and in one of the later ones showing the efforts two rookie heroes go through in order to recover a sword they lost on a quest.

While not much has happened in the way of plot yet, Goblin Slayer has taken its time to establish the main characters motivations and actions, the world and to show that it is a very dark mature affair. The main character is rather enigmatic and very straightforward, and the show is a bit too mature at times but there is something compelling about seeing this type of approach to fantasy. From the ending of these set of episodes it looks like the main plot will be coming to the fore very shortly. Definitely a series to watch, if you are not too distressed or sensitive to the rather disturbing events of the first episode.