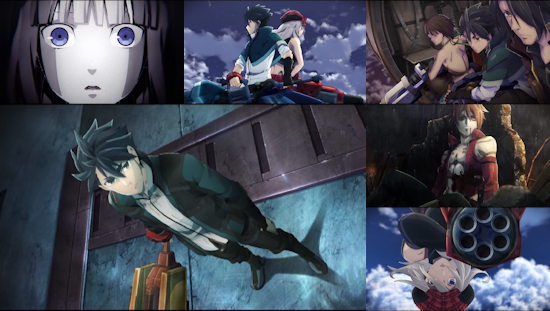 The advent of horrific monsters in the world has sent humanity spiralling to the brink of extinction, forcing what little remains of mankind to protect themselves as best they can within massive walls in the hope of keeping out these unnatural predators. Stop me if you've heard this one before...

To be fair, the Attack on Titan comparisons begin and end there, as God Eater is very much its own beast, based on the successful video game franchise that has also finally made its way over to the west. The core of the story is what you might expect of an adaptation based around a video game as we follow Lenka Utsugi, a new recruit "God Eater" as one of the few people capable of wielding special weapons known as God Arcs which are the only known way of combating the monsters which threaten mankind.

What's more, Lenka is a "New-Type" (the sound you hear is Yoshiyuki Tomino picking up the phone to his lawyer), a rare breed of God Eater - not that this cuts him much slack as his go-getter attitude before he's even completed training doesn't go down too well. However, when a major attack leaves the fully-qualified God Eaters stretched to the limit, Utsugi's intervention turns out to be a god-send (with every pun intended), and paves the way for him to fight on the front lines. The addition of a second New-Type seems like it could be just what's needed to turn the tide against the Aragami which threaten the populace, but of course life is rarely that simple...

Over the course of the seven episodes which encompass this first half of God Eater, I found myself vacillating frequently on my feelings towards pretty much every element of the series. Let's take the show's visuals for starters: God Eater quickly became infamous for the production issues suffered by studio Ufotable in the wake of their Herculean efforts on Fate/stay Night Unlimited Blade Works, but perhaps more troublesome is the general visual style of the series. A clear decision has been made to try and mimic the style of the original video games, but these games in turn mimic a cell-shaded anime style, which leaves us with a decided odd show which looks like an anime pretending to be a video game cut scene which it itself pretending to be an anime. The result feels a bit like taking some English text, then letting Google to translate it into Japanese before taking that text and translating it back to English again - it's recognisable and mostly functional, but you can never escape the sense that it isn't quite right.

At its heights, God Eater demonstrates what Ufotable can do best - fast, kinetic and fluid action that puts you at the heart of an intense moment. However, sometimes mere seconds later the animation can jump out of that groove and break any immersion instantly as it flubs its very next shot. A great example of this is a fight atop a plane in mid-flight - we see a fantastic scene that conveys the speed and danger of the moment, but then the next shot cuts to some poor CG which sees characters floating and moving in an unnatural way that extinguishes any positive effect the prior cut might have had. For the most part, the series looks accomplished and boasts some glorious backgrounds and great use of effects, but the constant shifting between high quality character animation and stiff, lifeless or just plain unrealistic moments takes some of the sheen from the series.

The show's narrative at this juncture is a similar story. As a simple action series, God Eater hits most of the right notes, with characters that are mostly without too much depth but still have enough to them for you to want to root for them, but at times the series tries to delve deeper into its lore with little success. Perhaps the biggest misstep here is the way that the show sprinkles "science bits" into each episode, flashing back to the trio of scientists as they work on experiments that ultimately lead to the birth of the Aragami and then the weapons that can defeat them. Whilst telling this back story is fine - sensible, even - sprinkling it throughout the series is not only less than satisfying but it also frequently breaks the pacing of current events, cutting away to flashbacks in the midst of important or tense moments. Perhaps loading an entire episode with this story beat may have harmed the series in other ways, but it still feels preferable to the delivery method used here.

If you're looking to watch the show in your native language, it boasts a pretty decent English dub as well as strong subtitles if you're sticking to the original Japanese audio; no matter your choice, there's an excellent soundtrack behind it which is one of the show's highlights at this point. With seven episodes squeezed onto a disc, it has to be noted that the DVD version of this release we reviewed here feels fuzzy and indistinct - we suspect the Blu-ray version will be far stronger in these terms, so if you care about picture quality that's undoubtedly the preferable format.

Given everything I've discussed, it's hard to come down firmly in either camp on God Eater - it has some strong moments and is a show you could make a decent highlight reel out of, but it also trips over its own shoelaces in places in a way that has a very real negative impact. Still, the overall impression is of a pretty standard and mostly polished action series which you can engage in without prior knowledge of the games, and the darker turn the show has taken by its half-way point might make its second volume a more tantalising proposition. It may well be that second half which makes or breaks the series as a whole, but for now it probably has enough for God Eater fans to enjoy - and a story with broad appeal to non-fans - to at least be worthy of consideration.