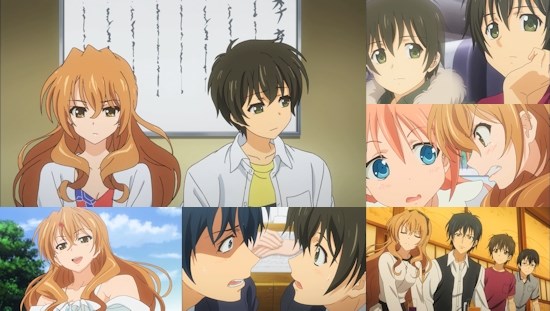 Anyone who has ever managed to get me onto the subject of anime romantic comedies will doubtless be aware of my outright adoration of Toradora, which to my mind is a true pinnacle of the form - a well-directed and smartly presented series with a strong cast of characters utilised perfectly in the name of both comedy and drama all of the way through to its satisfying end.

Given my love for that series (and its offshoot manga), I was always going to be chomping at the bit to check out the anime adaptation of Toradora's author Yuyuko Takemiya's latest work, Golden Time. It might not share a director but it does share a production studio in the form of J.C. Staff, so my hopes were high that at least some of its predecessor's magic might have rubbed off on this new streaming offering for the autumn.

The series begins on the first day at university, and more specifically a rather upmarket private law school in Tokyo - this is not a good first day for our protagonist Banri Tada however, as he finds himself late to the opening ceremony and then lost on his way to his first class. Still, it isn't all bad as Banri makes himself a new friend in the form of Mitsuo Yanagisawa, who strikes up conversation after becoming similarly lost. If Banri has problems, then Mitsuo has an even bigger headache on his hands - a girl named Koko Kaga, who makes her grand entrance by throwing a bunch of roses at Mitsuo and then storming off.

As it turns out, Koko is a childhood friend of Mitsuo's with ideas above her station - while he's attending university to try and get away from her, she dreams of marriage and beyond to Mitsuo, and has even opted to join the same law school so that she can continue her pursuit of him. Inevitably, Banri ends up falling in with Koko, and as Mitsuo goes into hiding he finds himself spending more and more time with this curious young woman as they both explore the formative days and weeks of their university lives.

Banri might seem like an amenable, everyday character, but his past is shrouded in mystery - quite literally, he knows nothing of his own past after a traumatic head injury suffered in high school has wiped his memory. It's a clichéd concept that comes into play more heavily as these early episodes progress, with the realisation dawning upon Banri that one new friend is in fact anything but new, while his relationship with Koko heads down a potentially rocky path.

Even aside from its decision to lean on that good old-fashioned "main character with amnesia" trope, the early episodes of Golden Time are packed with forced and frankly over-bearing attempts to generate drama so that it can build its characters - rather than allow individuals to grow organically, it seems determined to force them together in contrived ways, from the more reasonable examples such as out of control parties (mostly believable in a university setting) to the downright ludicrous (being effectively kidnapped by a religious cult). Unfortunately, this has the side-effect of rapidly breaking whatever sense of reality exists around the cast and their circumstances, and without that grounding in what we might consider normal the whole thing threatens to become rather silly.

Still, perhaps these growing pains are simply Golden Time trying to play a long game, and simply rushing through what would normally be a longer process of character building so that it can start digging in to the really juicy romance and drama the show promises? In fairness, it feels like there may be some legitimacy to that strategy - episode six suddenly bursts into drama aplenty as Banri reaches the end of his tether with regard to his circumstances, and it's by far the strongest episode thus far as well as the first indication of the potential we'd been looking for from this show.

It's this sixth episode that also serves to underline some of the stronger characters within the series - Banri does more than enough to propel himself out of the realms of "bland romantic comedy lead" by actually being a nice guys with some semblance of conscious thought of his own, while Koko is anything but likeable but still a sufficiently fascinating character that she has the ability to steal a scene when it's required from her. The show also has a decent line of comedy pertaining to these characters to keep things light-hearted, which also goes at least some way towards easing the frustration of those early descents into silliness.

Although there are positives to be found here as we reach the quarter-way point of the series, the feeling that this is a show that is finally starting to show its potential and blossom can't sway us too far from our thoughts on the episodes placed before us - episodes that aren't, when push comes to shove, all that good. Visually, the series struggles to strike out in any meaningful way, its audio mixing is downright terrible on occasion, and the heavy-handed way it builds up major elements of its plot are far from satisfying; all points which ensure that although Golden Time doesn't get anything horribly wrong to the point of being actively bad it doesn't feel like it's getting much right either.

If you're the patient type, then Golden Time may well be worth keeping an eye on - it seems to be heading in the right direction and starting to blossom, so fans of this genre should keep a watch out. If you don't want to sit through some half-baked early episodes on the off-chance that the series comes good in the long run however, you'd be well advised to play the waiting game for now.

You can currently watch Golden Time in streaming form on Crunchyroll.

6
It threatens to derail itself with some clichéd and downright silly plot points, but there are shoots of hope growing from the early episodes of this series to suggest it's still worth keeping tabs on.
LATEST REVIEWS