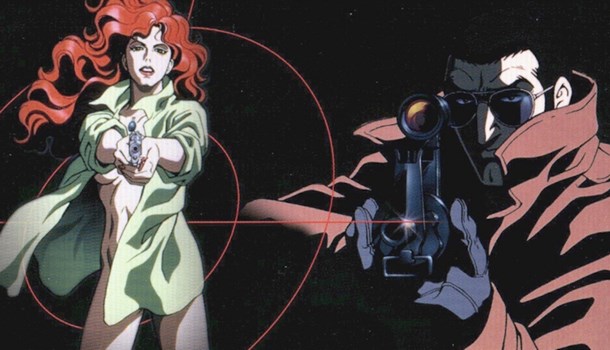 When our esteemed leader Ross offered up a two-disc edition of Golgo 13 for review, I snatched it up almost purely for sentimental reasons. When I was a young boy, I remember seeing adverts for the original UK VHS release of this movie plastered all over magazines and comics - This was a time way before my interest in anime had developed, but for some reason the promotional ads have always stuck in my head as being 'something cool' despite having never watched it for myself (and being way too young for the movie's 18 rating at the time). So, here I am, some twenty years later, to find out which of the two has aged worst - Me, or the movie?

Based upon the character first seen in Takao Saito's long-running manga, Golgo 13 is the story of a mysterious professional assassin, known to most only by his codename and his fearsome reputation as the best in the business, aside from a small circle of associates who refer to him by his real name (we assume) of Duke Togo. Our man Golgo is your typical assassin - Calm, collected, detached, and with a prevalence to wear shades no matter how dark it is. What lies behind that calm exterior? What drives the Duke to do what he does? Money, personal issues, love? So many questions, absolutely none of which are answered during the course of the movie. Golgo 13 cares not for personality or back story, instead focusing solely on a sordid mix of violence, sex, more sex and more violence. Yes, that's right folks, this movie sits squarely in that first wave of anime movies to cross over to a Western audience purely on the basis of being something of a 'video nasty', delighting in making sure that every woman has pneumatic breasts and remains naked throughout every scene while keeping the body, blood and severed limb count as high as possible, all of which while making every effort to keep the plot as simple and mind-numbingly tedious as possible. Ah yes, the plot - Golgo 13 kills people, rich businessmen wants revenge on said assassin and hires some unsavoury types to despatch the movie’s anti-hero.

The vacuous plot could perhaps be somewhat forgiven if the movie was a tour de force of high octane action scenes and top notch animation, but sadly it lacks in both of those key areas. The action sequences are both clichéd and plodding, while the somewhat Westernised animation most likely looked cheap back in the 1980s when the movie was first released - Now, it looks simply appalling. The only redeeming feature animation-wise is some rather artistic choice of angles and colouring at times, but even this often seems to be a way to animate the movie as cheaply as possible rather than through genuine innovation. Oh, and there's some very early (and ill-fitting) use of 3D computer animation in places, but these too are more likely to raise a chuckle than a gasp for an audience raised on Advent Children. Still, that early appearance of 3D animation may tempt you for historical reasons if nothing else.

In the end, it's hard to find anything much positive to say about Golgo 13, and even harder to see a reason why it’s befitting of a double DVD re-release. I get the feeling that the movie was cheap and nasty twenty years ago, and a couple of decades certainly haven't helped it mature into a classic, or even a cult, movie. Even if pointless violence or an outpouring of naked anime girls are your thing, there are plenty of better ways of getting your fill than this. Don’t fall into the nostalgia trap I did - Avoid this movie.

Extras-wise, the main focus of this two disc edition of Golgo 13 seems to be cramming as many different audio formats of the movie as possible together. Disc one features both English and Japanese soundtracks in 2.0 and Dolby Digital 5.1, while the second disc offers the main feature with a DTS mix instead. Considering the far from crystal clear and ageing nature of the audio, together with the poor voice acting (even on the Japanese soundtrack) you have to wonder why Manga Entertainment even bothered. That aside, disc one gives us an audio commentary, while the second DVD features a brief interview with the movie's producer, Mata Yamamoto. Not a vast amount of extras to spread over two discs really.