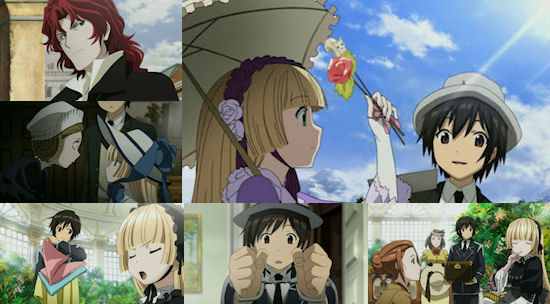 As one of the big name titles of the winter season with a series of popular novels behind it, Gosick failed to live up to those hefty expectations of its early episodes - it had all of the pieces in place to deliver a quality viewing experience, but a clunky execution of its mystery and detective elements in particular left rather a lot to be desired at times.

After wrapping up its first story arc at the end of episode three, the remainder of Gosick's first half deals with what is effectively another three more or less stand-alone tales of crime and murder with some horror-esque overtones.  Whilst Kujo Kazuya finds himself well and truly at the centre of all of these stories, it's once again Victorique who provides the brains of the double-act, with her "Wellspring of Wisdom" frequently called upon to "reconstruct fragments of Chaos" - in other words, she's as good at solving puzzles, mysteries and problems as ever, and of course it tends to be these moments of revelation that stick in the memory.

In fact, it's actually rather telling that by far the show's most outstanding story across the episodes covered here is the one where Victorique involves herself directly - a mystery which brings her to the place of her birth as she tries to clear the name of her mother, who was banished from her strange hometown accused of murder.  This particular tale succeeds in showing off everything that you'd expect from this series in terms of carefully building its story and the mystery inherent within it to a dramatic climax before unleashing its series of revelations and succeeding in building the relationship between Kujo and Victorique in the process.

Compared to this tour de force, the other two story arcs see Victorique serving as a "back seat driver", left at home to solve mysteries over the telephone and thus reducing her input to brief snatches of quality - a decision which fits in well with Victorique's status of nigh-on prisoner within the gilded cage of the school library, but does nonetheless reduce the potency of the show's most interesting character and relegate her to little more than a cute sideshow until she's required to solve a particular problem, which invariably comes out of the blue with little opportunity for the viewer to even try and fathom things out for themselves.

For all of the frustration caused by the way it mishandles what should be Gosick's "crown jewels" in its sense of mystery, the series to date does still succeed surprisingly well in other areas to somehow round out its faults into a more entertaining overall package.  We've already discussed the character dynamic between Kujo and Victorique, and that alone remains perhaps the best reason to watch Gosick, such is Victorique's sparkling mixture of arrogance and stubbornness with a soft centre in particular.  This relationship helps along the series as a whole in blending more serious themes with frequent touches of humour, expanding out to an entire episode of light-hearted happenings in the case of episode twelve.

This state of affairs make reviewing Gosick a tough proposition at this juncture - as a murder-mystery series its a bit lacklustre aside from occasional moments of genius, and the quality of each story arc framed against any expectations of a series led by that mystery and detective work varies wildly.  Yet, despite all of this, Gosick *is* still fun to watch more often than not, carried along by Victorique's behaviour and the way her unique character bounces off those around her, and with a river of fun and humour that also helps to bolster the show's more serious moments.

That overall entertainment factor is what makes Gosick worthy of your viewing consideration - it could have been so much better (and might yet deliver so much more considering some of the deeper threads that have been sewn into the series as it develops), but even without living up to those weighty expectations I can't pretend that watching Victorique pout and ponder isn't all that bad a way to pass the time.

7
Its murder-mystery elements don't always deliver, but Gosick manages to be entertaining despite its occasionally glaring flaws.
COMMENT AND DISCUSS
blog comments powered by Disqus