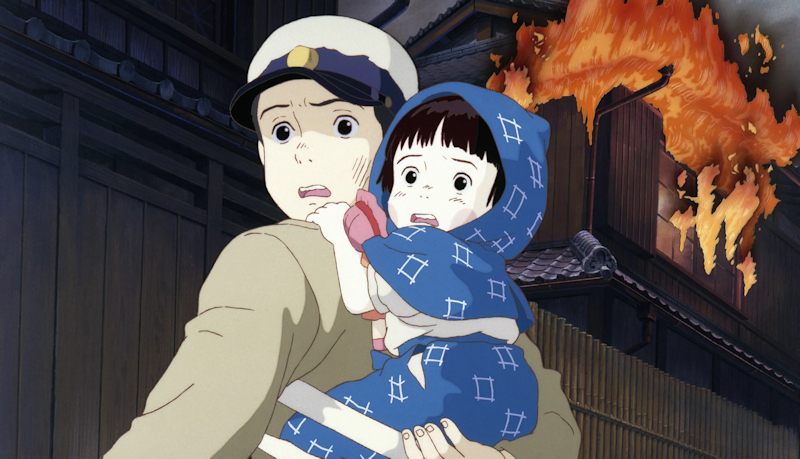 Grave of the Fireflies (Blu-Ray)

Mention the name of Studio Ghibli and minds will inevitably turn to good-natured and broadly light-hearted tales that will appeal to all ages and provide a suitably satisfying happy ending come the end of the film. While this is true of many of their works, it also ignores perhaps their most important and powerful piece - Grave of the Fireflies.

Directed by Isao Takahata and originally screened theatrically in Japan as a double bill with (of all things!) My Neighbour Totoro, Grave of the Fireflies is one of the next Ghibli offerings to get a remastered Blu-Ray treatment in the UK courtesy of STUDIOCANAL - a High Definition release that would be called "beautiful" were it not for the fact that the film's subject matter is far from it.

Set in the final throes of Japan's World War II campaign, the film follows two siblings - elder brother Seita and little sister Setsuko - as the direct effects of the war reach their doorstep. With their home and town firebombed and their mother caught up in the attack, the pair are sent to live with their aunt, but in a society put under pressure by the war effort and rationing, these two youngsters seem destined to fall into the cracks that have appeared within that society, with inevitably grim consequences.

Although Takahata has outright stated that Grave of the Fireflies is absolutely not an anti-war film, it's hard not to come away from the film with a feeling of futility about such conflicts as we watch all and sundry swept up in a war which means nothing to its country's people yet still disfigures its populace in myriad ways. The movie certainly doesn't shy away from depicting the horrors of this particular conflict to their fullest extent, whether it's piles of bodies being tipped into mass graves, horrific burns suffered by victims of fire-bombing attacks or the effects of malnourishment and disease - while this could easily result in a forced attempt at shock value, so carefully deployed and animated are these elements that they never fail to hit their target in terms of relating the horror of the situation to the viewer.

We should probably stress however that Grave of the Fireflies isn't relentlessly morbid or depressing - there are moments of joy to be found to break the tension in the simple pleasures enjoyed by Seita and Setsuko, and however brief they might be they do bring some balance to a film that requires at least some moments of levity, if only to remind us that its main characters are just children. The result of this carefully maintained balance is a powerful film that is incredibly difficult to watch but for all the right reasons - it isn't a movie that will allow you to sit and smile as the end credits roll, but nor does it intend to be. In short - it's hard to watch, but it's important you watch it.

Of course, the big news for this Blu-Ray release of the film is its High Definition transfer, and in short it looks incredible - the detail and quality on show here allows you to fully appreciate the care and attention that has gone into the film's animation, and those striking and gruesome scenes we mentioned earlier are even more difficult to wave away when presented in such clarity. With a crisp stereo audio track to accompany it, we can't really criticise the look of this HD re-release, sitting as it does perfectly alongside the other gorgeous Studio Ghibli Blu-Ray remasters.

Also in keeping with previous Ghibli releases is an impressive stack of extras upon the disc, including a feature giving some historical perspective to the film's setting and an interview with director Takahata himself - given the remit of the movie, it's great to see it getting the treatment it deserves in terms of additional materials.

Even before this Blu-Ray release, Grave of the Fireflies is a simply superb film whether you view it within the world of animation or as a cinematic work in its own right, and now we have our hands on the movie in HD this is easily a definitive version of the film. The only real sticking point is finding the motivation to watch something so emotional and harrowing of your own volition, but if nothing else you owe it to yourself to do it just once, so important is Grave of the Fireflies in both a film-making and historical context. If ever proof were needed that animation can tackle weighty issues just as well as, if not better, than other mediums, then this film offers evidence in spades.

English and Japanese LPCM stereo with English subtitles.  Extras consist of picture-in-picture storyboards, an interview with director Isao Takahata, Japanese promotional interviews with the writer and director, a historical perspective documentary, deleted scene and bonus storyboard, trailers, and an interview with the late Rogert Ebert.

10
A gut-wrenchingly emotional and harrowing film, given even more power via a pristine High Definition transfer. A difficult film to watch, but equally an important one.
COMMENT AND DISCUSS
blog comments powered by Disqus