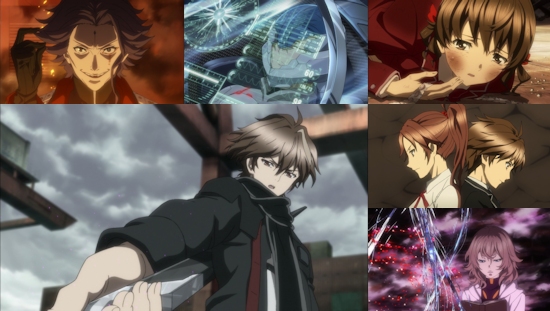 Would you believe that it's been over five months since the first half of Guilty Crown reached the UK? Quite possibly, if you've been keenly awaiting the emergence of the second half of the last series to come out of Production I.G.'s Section 6 before they split off to become Wit Studio - certainly, our very own senior editor was on tenterhooks waiting to watch it, which will be no surprise to anyone who read his glowing review of that first volume.

For anyone who can remember far enough back to the episodes that closed out part one, everything has changed in an instant for Shu Ouma, his friends and comrades - ravaged by a sudden outbreak of the Apocalypse Virus that was stopped at the brink of becoming a second "Lost Christmas", Tokyo's Loop 7 has now become a quarantine zone that has torn families asunder, and our left our protagonist amongst others with nothing for it but to live at their school. With supplies and vaccines for the virus which is still a constant threat running low however, this is far from an idyllic school life, and the pressures upon these resources slowly but surely take their toll, as the battle to survive gives way to survival of the fittest - a concept which, as events unravel, leaves Shu in the unlikely position of the school's "king" while his "subjects" are ranked and utilised according to the usefulness of the Voids. Think sci-fi Lord of the Flies, and you'd be on the right track.

If this brutal regime sounds like the stuff of nightmares, things aren't exactly much better outside the quarantine zone either, as Shu discovers once his group mounts a lethal attempt to exit the prison which is literally closing in around them - it's another shock to the system which is indicative of the darker tone of these episodes, which leaves Shu in particular with no shortage of difficult decisions as his role in what is to become of the future of the world come into clearer focus, and as battle lines are redrawn left, right and centre to leave former friends or colleagues as enemies and vice versa.

Although its first half occasionally showed its hand, the second half of Guilty Crown fully reveals the ambition of the series - it wants to be a new Evangelion; a new Code Geass; a new Darker Than Black, such are the influences that it wishes to build upon and surpass. Does it succeed in any of those ambitions? Well, no to be quite honest, and to do so would be a tall order beyond compare, but that isn't to fault Guilty Crown in and of itself. Certainly, it bites off more than it can chew, and at times the fervent mastication that comes from this leaves certain aspects of its narrative as something of a sloppy mess, but there's still an interesting story being told here and much of it is delivered in an enjoyable fashion thanks to a superb soundtrack, slick action set pieces and some strong ideas that make good use of the show's cast of characters.

The show also continues to look great throughout its second half (particularly on Blu-Ray) - it occasionally drifts off-model, but for the most part it's a visual feast that is at its best when things get busy. Character and Void designs are all memorable from start to finish, and even when the story wavers the visuals will often burn themselves into your memory to make up for any such stumbles. Both English and Japanese voice casts continue to do a great job throughout the second half of the series in delivering the ever-more emotional and dark tone of events, while still snapping up moments of levity whenever they raise their head to give the viewer a breather. Admittedly neither cast can do enough to make Shu a particularly likeable character, but that would probably be too much to ask of even the finest actors given his simpering, easily swayed personality.

Although my cohort Ross gave Guilty Crown's first half a perfect ten I look at the series, and particularly its second half, as more of a flawed but enjoyable series - its premise often feels better suited to a video game (who wouldn't want to run around this world pulling out various Voids and using them to solve puzzles and defeat enemies?) and its myriad influences lead to the series being a jack of all trades but master of none, but the simple fact that it tries so hard and proves so willing to test its ambitions is not only endearing but also creates some memorable moments. It looks great, it sounds great, and its story has enough greatness to it to be well worth checking out if you find any aspect of it intriguing.

In other words, Guilty Crown is one series that you shouldn't a-Void. What? Why are you all groaning?...

7
It falters under the weight of its own ambition, but Guilty Crown's second half is still a visually eye-catching and frequently engaging series.
COMMENT AND DISCUSS
blog comments powered by Disqus