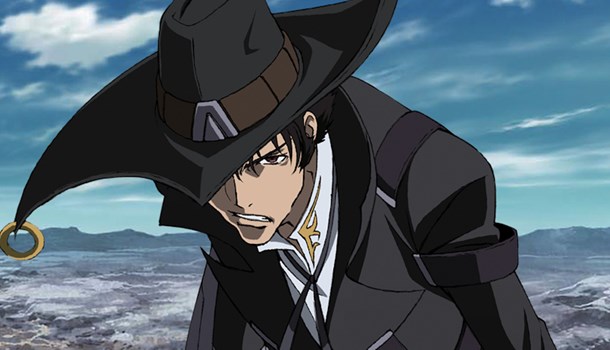 I was genuinely taken aback by Gun Sword, but not by the smooth visuals or the excellent CGI, but by the blatant borrowing of ideas and settings from several other anime. It’s like a fanfic! Let me explain…

Van is a wandering nomad, impossibly thin and decked out in a black cowboy suit, complete with fancy hat and holster. The funny thing is, the guy looks like Cowboy Bebop’s Spike Spiegel dressed in a Gungrave outfit, wandering across Trigun’s sci-fi Western world accompanied by a giant mech seemingly culled from any one of a dozen giant mech shows. It’s so bizarre that it’s initially very distracting, but as the action kicked in, I became engrossed and started to forget that it had been created from an anime jumble sale.

Van himself is exactly as you’d expect – a slacker warrior with a dark past, he’s clearly looking for some shadowy arch nemesis, fighting a number of increasingly bizarre characters on the way (award for daftest weapon ever goes to the guy with the flexible moustache!). Accompanied by cute but naïve Wendy, each episode is a self contained action-comedy with some great CGI, stirring battle music and a good deal of snappy direction. Oh, it’s cheesy, but it’s also great fun.

The first two episodes are standard introductory fare - Van saves Wendy from a marauding gangster, making Wendy a starry eyed believer who would follow him anywhere. But episode 3, dealing with a group of over-the-hill armour pilots yearning for glory days really won me around with it's touching sentimentality and engaging characters. It still had serious Trigun overtones (sans giant mechs) but it had heart, dammit! The final episode also feels familiar, but shows just how far Wendy will go for friendship.

Even if you’ve seen some of the other series mentioned above, Gun Sword does it’s job very well – it isn’t going to wow you with its originality, but it’s a ripping yarn with excellent production values, entertaining characters and some kick ass battles. And hey, if you’re going to borrow ideas, at least this series has the sense to borrow from the best!

A weird CGI/cel shaded couple of shorts, which were real oddities. Otherwise just trailers for Speed Grapher and OMG! the series.

7
A little injection of its own personality would see this score higher, but polished and enjoyable regardless.