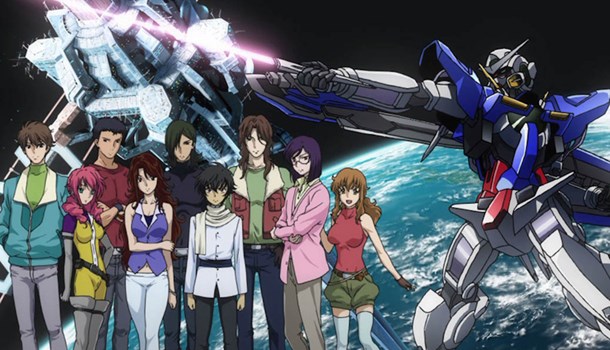 This is quite a chunk of Gundam to get through, but suffice to say that after the events of volume 1, whereby the mysterious Gundam Meisters of Celestial Being(an organisation dedicated to peace through armed intervention) have shaken up Earth's global polictics, everything escalates - the armies of Earth step up their search and destroy efforts, Celestial Being's secrets are revealed, and even the Gundam Meisters aren't prepared for a new threat (or ally) in the shape of the three Gundam Thrones.

Gundam does love its politics, and they are heavily evident in this show. Though not quite as complex as SEED (which had twice the room to make things complex at 50 episodes) but it does at least carry enough logic to be believable. The united nations of the Earth are bought together in a frantic effort to dispose of the Gundam threat, and many lives are lost, on both sides.

In this at least I found my only real fault with the series - many of the characters who are supposedly key to major events are glossed over, disposed of too easily or simply too indestinct to tell apart. While this muddle doesn't affect the plot too greatly, I did find myself scratching my head as to who was what, where they were and why at times.

The Gundam Thrones represent one such conundrum - their existance is never fully explained, rather they seem to be treated as a disposable distraction. Whilst their impact on the tale has ramifications, it seems far too messy to be part of a grand plan, and subsequently becomes a bit meaningless, save for adding an attractive, insane redhead to the party in the form of Nena Trinity. She'll never hold a candle to SEED's Flay Allster though!

Putting that aside, the show is extremely sharp - mecha and character designs are very well realised, and animation is of a very high standard. The show has pulled out all the stops for the music too, with L'Arc En Ciel always a good bet for a stonking opener, though there are other standout tracks too, such as Daybreak's Bell.

What Gundam delivers is a very sexy, tight show that occasionally loses its footing when it comes to the plot, but somehow holds everything together in the larger scheme of things. The main Gundam Meister characters are, for the most part, like-able enough, and though there's a fair bit of Emo fanservice, the show never goes too far into naval gazing.

If you're a Gundam fan, you'll find yourself well served here. The fights are suitably meaty (and bloody), the action shifts at a cracking pace, and unlike SEED, the politics are kept to a serviceable minimum. It's a hefty investment at £105 RRP for the entire set, but ultimately worth it.

8
Sharp, concise and clearly set for a second season, this is solid entertainment for mecha fans.