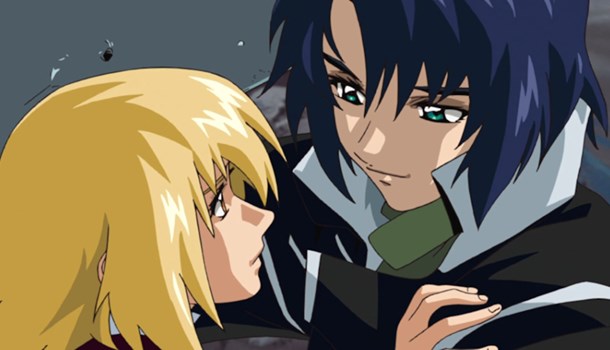 Having been a fan of the original Gundam SEED, which captivated me over its 50 episode run, I was somewhat dispondent when I started hearing that the follow up, entitled Destiny, was so bad that it damaged the original. Not the news you'd hope for when getting ready for another 50 episodes.

I'm happy to report that with these first two discs, the series suffers no damage - in fact, for only 10 episodes, there's a lot packed in, some interesting new characters and even some familiar faces to get us in the mood.

The series starts out a year after the previous war between Coordinators and Naturals, with the battle of Jachin Due now long behind humanity, many look forward to a new era of peace and prosperity.

In a pretty depressing indictment of humanity, there are some factions that still wish to see Coordinators wiped out, with war a desirable outcome to be ushered in at all costs.

The main cast of Destiny, at least initially, are in a familiar predicament - an inexperienced crew thrust headlong into events aboard the latest Zaft warship, the Minerva, thrown up against impossible odds and skilled, vindictive warriors. Carrying a full compliment of Zaku units (familiar to older Gundam fans) and the Impulse Gundam, it's certainly not lacking firepower.

Chief amongst the new cast is the Impulse pilot, Shinn Asuka. His family were murdered in the attack against Orb chronicled in the original SEED series, he's headstrong and passionate about protecting his friends, and hates the hypocrisy of war. His skill makes him the deadliest weapon in the Minerva's armoury, and their main weapon against the Abyss, Chaos and Gaia Gundams, whose theft in the first episode is the spur to everything that follows.

There's too much to really summarise beyond that without turning this into a full-on article (watch for that soon!) but this first disc certainly delivers on action and intrigue. True, it took me about 3 episodes to really get back into the show, but after such a long absence that's to be expected. The new cast is a nice, and indeed necessary, touch - with most of the original cast killed off in SEED, new blood was certainly needed. Shinn is every bit as Emo as Kira ever was, and if indications are anything to go by, the two will be facing off soon enough. Athrun and Cagali return early on, with Athrun working under an assumed name (something that seems to have been necessary for most of the survivors of SEED) but I found myself yearning for more of the original cast to turn up.

With another 40 episodes still to come, there's no doubt that Destiny has a long way to go, but it's off the starting blocks, and it's going strong!

Extras on these 2 discs are scarce, with mecha/character files and some trailers. But hey, you get 10 eps between them, and that's got to be good value ^^

8
A solid start to the series, which doesn't quite have the impact of the first SEED... yet.