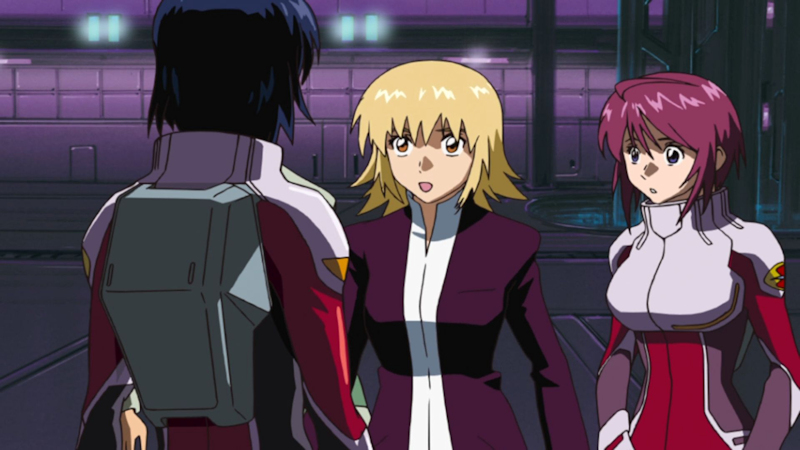 At last - worlds begin to collide (almost literally!) in this third installment of Gundam Seed Destiny. As an orbital colony heads towards Earth on a collision course, characters from SEED and SEED Destiny are thrown together, and once again Kira takes to the skies in a bid to defend the universe with some old friends.

Not that the new characters in the SEED universe aren't interesting on their own, but there's just something spine-tingling about watching the heroes of the last war take up the call to arms and showing the new kids how it's done.

Up to now, we've had a lot of political machinations and jostling for position - now we're starting to see the payoff and its soooo good! There are some fantastic battles here, as the Minerva is caught between the Orb Territory and the Earth Alliance forces, giving newcomer Shinn a chance to show us why he deserves top billing in this series.

There are also some rather dark conspiricies afoot - in a fantastic peice of direction, colony forces attempt to assasinate Lacus Clyne at the orphanage. For once a Haro does something other than irritate, as it proves an effective early warning system - just watching his little eyes light up as the alarms are tripped was a real rush. It's the small things that get you pumped, and the ensuing gunfight is superbly finished off with an appearance by the Freedom Gundam - when that iconic mech appeared I had shivers down my spine. THIS is what SEED is about, and my God it's great to see it back properly.

The usual character bios and some trailers. As usual, 5 episodes to a disc more than make up for the lack of extras.

10
SEED back in full swing. Some utterly fantastic moments on this disc make it essential.
COMMENT AND DISCUSS
blog comments powered by Disqus