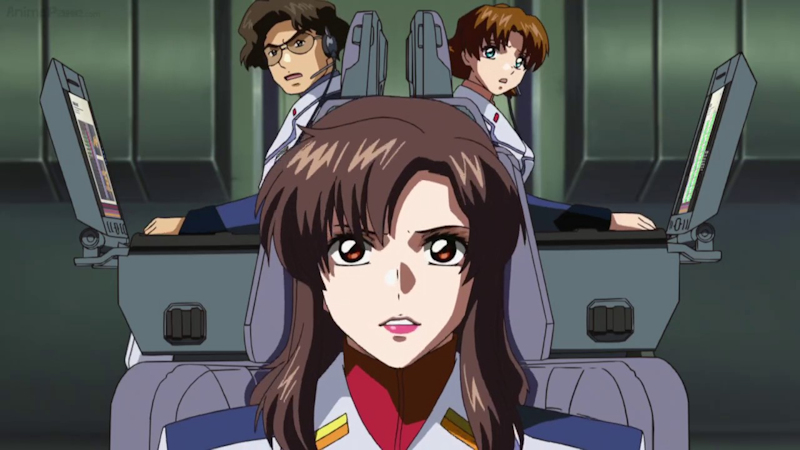 It's funny how you don't know what you're missing until you find it again, and these 3 volumes of Gundam SEED Destiny have been watched every night for 3 days now. And every single night it's an effort not to pop the next disc in.

Volumes 6-9 deal with the machinations of the LOGOS organisation, the warmongering leaders of weapons manufacturers who have been creating conflict for hundreds of years. Their leader, the rather effeminate Lord Gebril, is the loathsome specimin driving much of the confliut, and we soon see the terrible depths of his homicidal machinations...

Of course, our heroes are locked in battles of their own - the tragic conclusion to Shinn and Stella's would-be romance is another driving force, but it's the appearance of the GUNDAM Destroy that really mixes things up - standing some 10 times taller than standard GUNDAM units, they begin to destroy peaceful cities that have been "tainted" by association with the Co-ordinators. It's heart wrenching stuff, and although Shinn's actions are highly questionable throughout these volumes, it's not him we're cheering for. It's Kira.

ALthough he's used sparingly throughout the series, any appearance by Kira and, more importantly, his Freedom GUNDAM, still has the power to send chills down the spine. It's a credit to the directors that, even though you know he's coming, his arrival is always awesome. But other older characters also begin to move into the limelight, with Athrun, Captain Murrue Ramius and even Andrew Wartfeld all making spirited appearances. But the best of the bunch, just pipping Neo Roanoake's memories beginning to return, is Lacus.

There can be nothing scarier than a pop-idol with her own army, but has any pop-princess ever had more clout than Lacus? She's practically a cult, backed up by cutting-edge technology and scores of soldiers ready to die for her. One scene in volume 9, where she reappears on TV for the fist time in an age (cutting off a transmission from a fake Lacus) is totally mesmerising.

I feel I've slipped out of the reviewers chair and into raging fanboy mode, but this is one of the very best shows in the UK by my standards. The voice acting in either language is excellent, the action fast and superbly directed, and the storyline is full of plot-twists and cliff-hangers that help provide that "one more episode" addictiveness that, so far, has only been matched by it's own first series and Death Note.

The naysayers may point out that the overall pace and the new characters don't match the first series, and they'd be entirely right. What Destiny does do well is evolve the characters in an intelligent and thoughtful way. Sure, it misfires on occasion, but what series doesn't? Every episode of Destiny has something to enjoy, and that's a pretty high hit-ratio for any 50 episode series.

Oh, and one other thing, whoever decided on the insipid and laughable third opening track needs to be shot.

The usual character info and trailers.
9
A real thrill to see characters you know and love return - it may be overdue, but it was worth the wait!
COMMENT AND DISCUSS
blog comments powered by Disqus