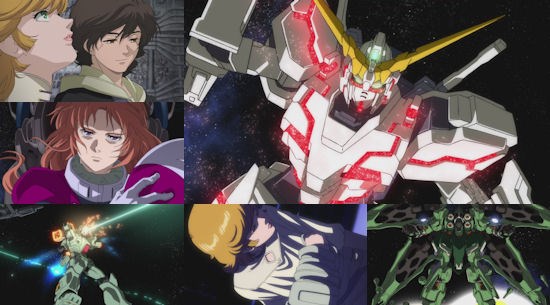 The year is 0096 U.C., nearly 100 years after humanity’s first ventures into space colonisation. The turn of the Universal Century promises advances in colony construction, robotics and the theorised evolution of mankind in space: Newtypes. In reality, it is tarnished by the last 2 decades, filled with brief yet bloody civil wars between the ruling Earth Federation and the independent space separatist republic of Zeon. Technological advances became focussed on weapons development; large robot war-machines called Mobile Suits were created; human experimentation was covertly implemented to bring about the ultimate pilot and human rights atrocities left billions dead in their wake.

It is now that we join Banagher Links and his classmates aboard a new space colony still busily under construction. The events of Char’s Rebellion a few years ago nearly left the Earth uninhabitable, leaving a growing need to train engineers to build in space. On top of that, the school also serves to educate the younger generation about the mistakes of history that must not be repeated. Unfortunately, it seems that fate has other plans. The foundation that owns the school is a front for pioneering research which is secretly developing a brand new weapon inside the colony. At the same time, a new organisation is on the rise which may have ambitions for resurrecting the Zeon Republic. It’s only after rescuing the mysterious ‘runaway princess’ Audrey Burne that Banagher comes to realise the magnitude of the events conspiring around him and by the time the Earth Federation military arrives at the colony it is already too late. War is inevitable, the civilian colony is the battlefield and the prize is a single Pandora’s Box hidden inside: Unicorn.

As a first episode to the series, Gundam UC really sets things off with a bang. An exciting action sequence at the beginning whets the appetite with some hot Mobile Suit action before taking you to the main arena where things slowly come to the boil before all hell breaks loose. However, for me it’s these quiet moments beforehand that really help set the Universal Century Gundam apart from the majority of other robot shows. You get a fantastic feeling of a new frontier as a character wanders about in low or zero gravity and the detail within the colony really helps to put the sense of scale into perspective. Story-wise, there is a complaint that the plot so far might be impenetrable to viewers that aren’t familiar with the existing UC timeline. On the contrary, I’d dare say that many things will be so for the majority of viewers - There’s a whole lot of foreshadowing and references to elements that I can only presume will come to the forefront in the coming instalments. There is a clever attempt at induction via the use of the history lesson the children sit through but ultimately it’s nowhere near as useful as a simple opening narration would have been.

Of course, trying to judge the first episode of a series on plot alone feels a little moot at this point. What really matters here is the impact and that’s where this manages to shine. The animation is fluid, the visuals are bright and distinctive. and warfare plays out in the form of great robotic action with plenty of collateral damage. The mechanical designs are fantastic, be it one Mobile Suit that transforms in to a high-mobility fighter, a gigantic green lotus with dozens of floating remote gun drones or the lead Unicorn Gundam itself. To top it all off, this is all weaved together with an amazingly epic orchestral score.

I’d love to recommend this to everybody but this clearly isn’t going to be for everyone and the fact that this is only the first instalment with the next not due until November compounds that. However, if the series continues to build upon this quality and manages to deliver a decent plot to go with it then this could be the start of something special.