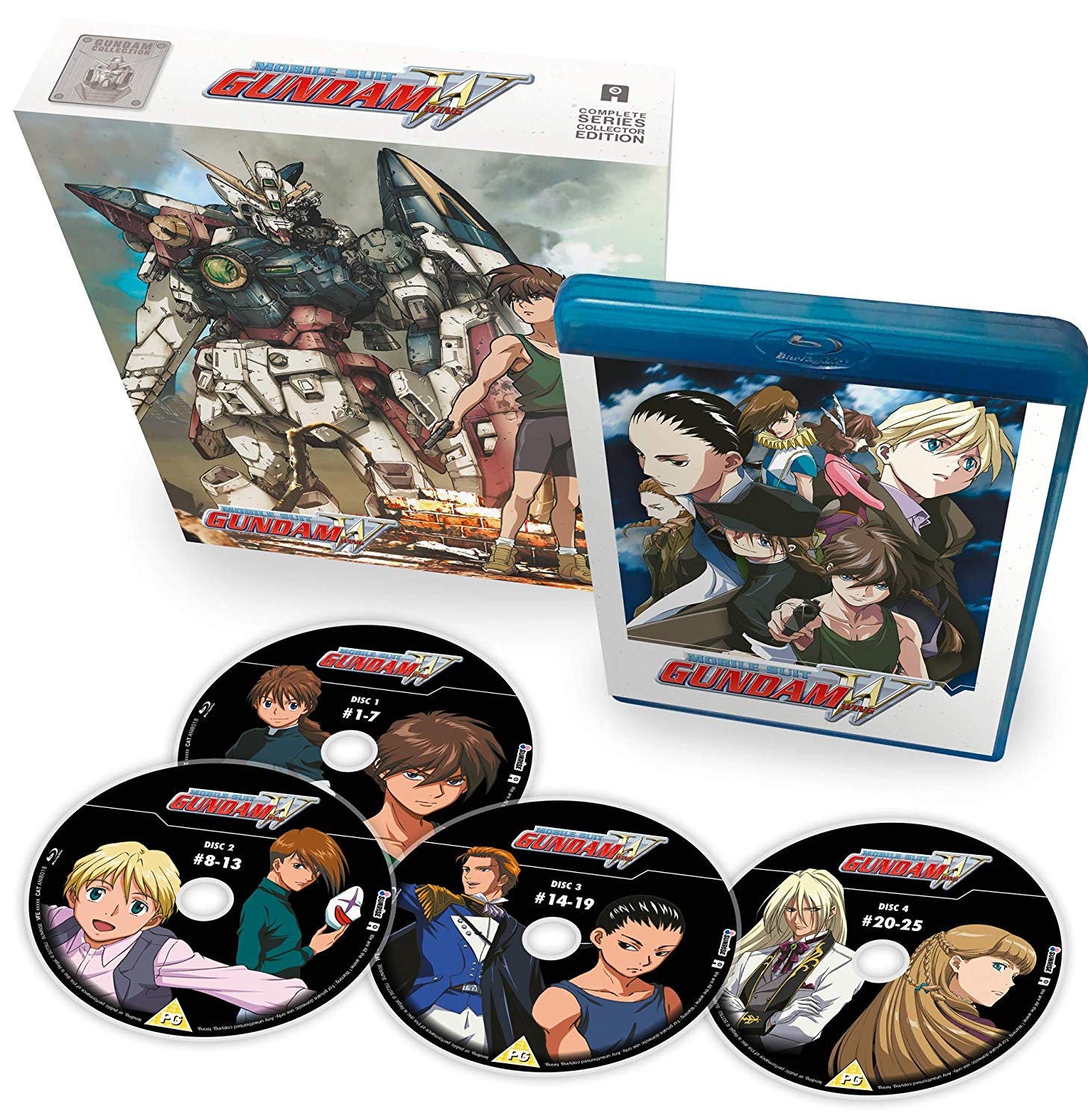 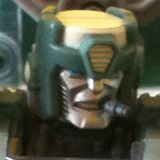 The year is After Colony 195, and mankind has established space colonies at each of the Lagrange Points in earth orbit. 14 years have passed since the assassination of the colonies pacifist independence leader Heero Yuy by the United Earth Sphere Alliance to maintain their control over the colonies, and the plans of five rogue scientists have come to fruition: Five unique mobile suits – called Gundams for their construction from Gundanium alloy – are sent to earth, each piloted by a specially trained teenage boy, with a mission to wreak havoc amongst The Alliance’s more militaristic arm the Organisation of the Zodiac (or OZ for short).

This is Operation: Meteor.

I think it’s safe to say that rewatching this blu-ray release of Gundam Wing’s first half is proof that nostalgia is one hell of a drug, as the first time classic opener Just Communication kicked in I was sucked right back in to the deep bucket of cheese that is the glory of Gundam Wing, with the boyband aesthetic of the five Gundam pilots, some of the most iconic mecha designs of the whole franchise, and one of the more engaging groups of villains in Treze Kushrenada (you magnificent *******), Zechs Marquise (Wings designated Char analogue), and the sublime Lady Une. Throw in a supporting cast that includes Relena Darlian, Lucrezia Noin, Sally Po, the Maganac Corps and the loathsome Chief Engineer Tsubarov, along with a plot that fairly clips along as the Gundams wage  a war against The Alliance whilst OZ and its backers manipulate events from the shadows, and you have 25 episodes that blow past fairly quickly and leave you wanting to watch the rest.

Ok, nostalgia glasses off. This first half of Gundam Wing represents possibly the most requested release since All The Anime got the Gundam licence and began releasing the show, and with good cause; for years the Gundam franchise had failed to gain traction in Western markets, but Wing hit  like a meteor (….I’m not sorry…) and was a lot of folks (including this humble reviewers) gateway to Gundam, both the GunPla kits and the various shows, when it hit on the Toonami block in 2000. And it’s easy to see why – whilst the Universal Century presented a very dense, quite crunchy narrative, and G Gundam was more than a tad insane, Gundam Wing distils the conflict down to an easy to sell premise, that of the five Gundam’s being sent to Earth as revenge for the death of the leader of the space colonies peace movement Heero Yuy, and then it progressively builds from there by making characters on all sides of the conflict more than just 1 dimensional caricatures (not that there aren’t more than a few who are like that – looking at you General Septum and Engineer Tsubarov…). Couple that with action that remains quite inventive and thrilling today and you have a winner.

With this release All The Anime have given fans the chance to own possibly the crispest version of Wing to date. Now this is a show that was initially aired in 1995 in Japan and it does show it’s age in terms of the picture ratio and lack of audio options, so be warned if black bars on either side of the picture might niggle you. It’s also notable that once the signature moves of the Gundams are established those animations do start to see a fair bit of reuse, but thankfully at this point whilst it is noticeable it is not massively so. Instead you have a show that frequently finds inventive ways to show off the abilities of the various characters, and for some genuinely thrilling mecha combat. Which is great as Wing features some of the more unique and varied designs of the franchise – The five Gundams all incorporate the trademarks of the chassis in terms of head design and use of white in the pallet, but the Wing, Deathscythe, Shenglong, Heavy Arms and Sandrock all then deviate from the template in their own specific ways (Wing being able to transform and it’s OP Buster Rifle, Deathscythe being the stealth suit, Shenglong with it’s polearm energy blade & flamethrower, Heavy  arms ludicrous amount of ballistic weaponry and Sandrock with it’s giant scimitars); The Zodiac series of mecha remain quite unique amongst other Gundam shows, with that distinctive oversized ball joint at the shoulders and each one fulfilling a distinct battlefield role; the unique mobile suits of the Maganac Corps (a personal fave) that share  design traits with the Sandrock that they often act in support of; and finally the Tallgeese, a suit we will see two variants of later on but here in its stock white & black is one of sexiest suits of the whole franchise. A couple of nice touches are A) it’s consistently shown as being larger than the other mobile suits in the show which helps get across its raw power, and B) if you look you can see bits of the Tallgeese in the other mobile suits. Moreso though in the OZ suits to be fair.

We also need to talk about the dub. Now first things first, the voice cast are almost uniformly top notch. The 5 Gundam pilots VO’s (Mark Hildreth as Heero, Scott MacNeil as Duo, Kirby Morrow as Trowa, Brad Swaile as Quatre and Ted Cole as Wufei) acutely get across each of their characters core personalities and their individual struggles with undertaking the missions they are given and coming to understand the consequences of their actions; Brian  Drummond’s Zechs Marquise might be my favourite Char clone, and to my mind  is certainly the most stylish (no seriously – those OZ uniforms are charmingly retro, and his later switch to all whites & greys with a bolero jacket is a bold choice), but Drummond makes Zech’s a nuanced soul who understands the hypocrisy of his choices but commits to doing what he believes is for the greater good. Likewise David Kaye embodies Treze with a smug arrogance that would be irritating if he wasn’t so damn charming (and clearly one step ahead of everyone) but especial praise has to be made for Lisa Ann Beley & Enuka Okuma as Relena and Lady Une respectively.  Beley really sells Relena as a teenage girl, slightly spoiled by her upbringing, but with a core of steel that the show continuously refines as she interacts with Heero and learns just how far the Alliance has impacted her life, whilst Okuma has the unenviable task of embodying a character who is both a merciless killer as Treze’s right hand, prone to fits of rage & jealousy about those she feels are infringing on her relationship to him, and later a split personality that is the polar opposite. Okuma handles both with aplomb.
Sadly though for all the casts strengths they do have to work against the animation which forces some unfortunate choices on the dub script. There is a certain clunkiness to some moments that marks Gundam Wing as being very much of its time. Some of the voices also rely a tad too much on  the versatility of the cast – for the love of god don’t try any drinking game associated with how many times you hear Scott MacNeil voicing multiple characters - your liver won’t survive it – whilst several others are just plain odd. For example General Septum might have one of the most irritating voices in all of animation, enough to make you question how his troops haven’t shot him by now, and the switch in actors for Sally Po from episode 20 onwards is a jarring one as they sound nothing alike.

Other niggles? Sometimes the Gundam pilots are a tad too hyper-competant, especially Heero who really does take a massive amount of damage over the course of these episodes, including but not limited to multiple gunshots, being blown up, and dropping down a cliff face, whilst the machinations of OZ and their parent Romefeller can come across as being overly reliant on very specific sequences of events taking place, to the point of incredulity.

For all that though Gundam Wing is an entertaining show, and All The Anime have done a first class job on the presentation of this Blu-Ray release. The second half of the series and the Endless Waltz OVA’s/movie should arrive by years end according to All The Anime’s plans, and there has been talk of a combined release of all three parts further down the line so something to consider when deciding if you want to pick it up.

8
Overall then a fun, if flawed, first half of what is still an important piece of anime history.
COMMENT AND DISCUSS
blog comments powered by Disqus