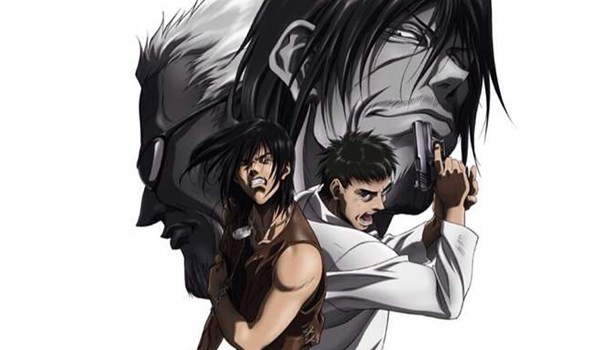 I first saw Gungrave at Amecon in 2004. Myself, Kev and a few friends spent about 2 hours sat in the kitchen of our student accommodation and watched straight through the 10 episodes available on a laptop, and to my mind it was the best 2 hours of the convention!

Based on the hit PS2 game of the same name, I was initially worried we’d be introduced to a soulless kill fest with little to recommend it, and at first glance, that’s what we get. First impressions couldn’t be more deceiving. Although the opening episode begins with the introduction of the superhuman Grave, an ass-kicking sharpshooter with questionable fashion sense, we’re soon transported to the man’s past as a young man named Brandon Heat, and we follow his life from a street punk to a mafia style “sweeper”, along with his friends, not all of whom survive to make the journey with him.

As a story, Gungrave follows a similar narrative to the masterful Berserk, a story of a young fighter who is first introduced as a supernatural killing machine, before taking us through his life via flashback. Gungrave’s setup is every bit as effective, leading us to a modern day crime drama that’s superbly constructed, with a cast of sympathetic and brilliantly written characters that just seem so alive that you’re genuinely shocked at the twists and turns in the action packed story.

The inevitable betrayal of Brandon by his best friend Harry had me gripped by the four episodes we get on the first disc, and you wonder how two such close friends can be so brutally torn apart. The characterisation is beautifully realised, and even the mafia’s goons have personality and motivation.

The animation is pretty standard TV fare, but the character designs (by Trigun designer Yasuhiro Nightow) are appealing and nicely stylised. Music is understated for the most part, but the production values in all areas are fairly standard stuff.

The DVD extras are minimal - the usual textless opening sequence, character designs and a fistful of trailers for future MVM releases (such as Lunar Legend Tsukihime, reviewed next week) are all we get here.

That said, anyone who enjoys a gripping storyline featuring realistic adult characters should absolutely adore this title. Go grab it.

9
Lovingly crafted tale of crime and betrayal, one of anime's finest TV series.