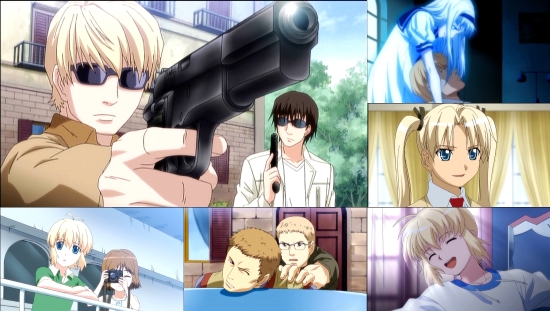 When we reviewed Gunslinger Girl: Il Teatrino back in May, one of our complaints was that it lacked the show's two additional OVA episodes that served as an epilogue to the series - not a massive oversight perhaps, but a disappointing one nonetheless.  Thankfully, Gunslinger Girl completists need fret so more, as Manga Entertainment have instead decided to release these two episodes in a stand-alone form to fill that particular gap.

Although we've just referred to this pair of episodes as an epilogue to the series, it's hard to truly sell these instalments as such - rather, what we have here are two side-stories that have no direct impact upon the events within Il Teatrino, but rather take an introspective look at some of its characters.

The first of these two episodes focuses largely on Rico's handler Jean, hinting a little at what drives both himself and his mostly frosty relationship with Rico in the wake of an operation that sees him coming into direct contact with an old acquaintance which brings back some bad memories.  Aside from Jean's own feelings here, we also get to see some of Rico's own fears cemented via a dream sequence to round out an episode that clearly has its heart in the right place, but falters on account of simply not having enough time to deliver a nuanced story or character examination.  Instead, what we get during the episode is an information dump on the show's internal politics from Jean and some heavy-handed hints about his past that's blended into the complete arbitrary framework of a mission that only really serves to allow for a couple of action scenes during its running time.

Perhaps thankfully, the second OVA episode on this disc realises that it doesn't have to attach its story to a mission, and instead we follow Henrietta and Rico as they take a vacation with their respective handlers - a journey which delves further into Jean's past and family memories, whilst also taking a disappointingly small amount of time to give us a quick update on Triela's state following her torn emotions and pitched battle with Pinocchio in the series proper.  Unfortunately, come the end of the episode we seem to veer away from everything that makes Gunslinger Girl what it is, instead leaving us with a borderline ghost story that feels entirely out of place in the show's universe.

What this leaves us with is a pair of episodes which are, quite simply, unsatisfying to watch, particularly when separated from the series of which they were originally part.  Taking some time out for a deeper look at some of the show's characters, and particularly the girl's handlers, is a great idea in itself but its treatment here is bland and only really scratches the surface of its subjects, largely in a downright obvious way that feel more like points that could have been squeezed into a chunk of exposition within Il Teatrino's wider story.

With a recommended retail price of £14.99 (although of course you'll find it a lot cheaper at online retailers), this feels like a steep price for two subpar episodes from a series which didn't exactly set the world alight compared to its predecessor in the first place.  Its audio-visual treatment here is decent enough, and if you're a huge Gunslinger Girl fan and a completist to boot then you'll probably want this DVD on your shelf - for the rest of us however, it's hard to whip up much excitement for this release which promises much but delivers very little.

English 5.1 and Japanese 2.0 audio with English subtitles.  Extras consist of textless opening and ending credits and an interview with Masaya Matsukaze, the actor who plays Hilshire within the Japanese voice cast.

4
A weak pair of OVA episodes makes for a hard purchase to justify unless you absolutely must own the Gunslinger Girl anime in its entirety.
COMMENT AND DISCUSS
blog comments powered by Disqus