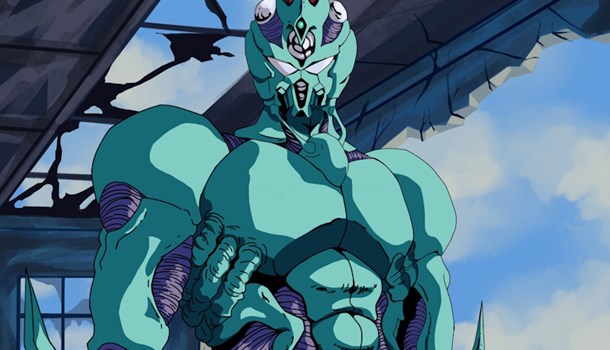 Initially, the Guyver was released by Manga Video as a monthly video comic. As marketing ideas go it's a bit of a nightmare, but actually proved stunningly effective - it was in the HMV top ten for a good while, and went a long way to giving anime some
mainstream publicity.

The story concerns schoolboy Sho, and his chance encounter with a control medallion, which just so happens to embed itself into his brain, activating the Bio Booster Armour Guyver when he gets stressed. Unfortunately the Chronos corporation want to get their hands on it, and have some rather handy humans who morph into monsters ready to chase after it.

Basically this is a monster slasher for teens - tons of blood and messy snapping limbs for the discerning adolescent in the family. The animation is basic, the plot inconsequential and the scripting basic, but I found myself relatively intrigued by it.

If your idea of a good night is getting hammered and watching ugly brick cack houses beating seven bells out of each other, you need help. You could also use this series, it's perfect for you ^_^
6
Mindless but fun, with good designs