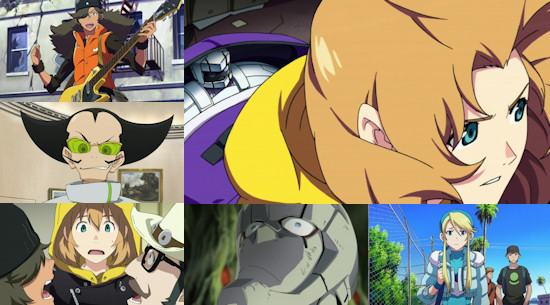 When we looked at the opening three episodes of HEROMAN to give you an early taste of the series and what it's all about, we ended up giggling in childish glee at the cavalcade of colour and action which the show offered, bringing back those fading memories of Saturday mornings in front of the TV watching cheesy yet incredible enjoyable cartoons.  The question is; can it maintain this sense of wide-eyed nostalgia beyond those opening instalments?

For much of the remainder of HEROMAN's first half, we continue to deal with the Skrugg invasion of Earth, turning the tables to move Joey Jones and his friends away from simply defending humanity and themselves from annihilation to put them on the front foot as they look to repel and defeat this evil alien race.  Thanks to Professor Denton's eccentric ingenuity they enter this battle to destroy the Skrugg control centre complete with additional weapons - although it will take more than just brute force to triumph here, as the group also eventually find themselves confronted with an even more difficult dilemma; one which will reverberate throughout the rest of the series no doubt.  As Joey and HEROMAN travel ever deeper into Skrugg territory, so the more dangerous their operation becomes, bringing us the expected mix of dilemma, action and ever-more powerful attacks from both friend and foe.

While this continued battle against the Skrugg carries the simple entertainment values of those early episodes, things understandably threaten to lose their way a little in the aftermath of that conflict - All of a sudden, Heroman isn't fighting aliens but doing building work and thwarting kidnappers instead, which inevitably becomes a little dull, not helped by some clumsily typical attempts to progress the romance between Joey and Lina (who finally finds an excuse not to wear a cheerleader's outfit twenty-four hours a day).  The series tries to spice things up further by introducing an older sister for Joey out of the blue, but this too feels clunky in its application.

Just as things are starting to look down for this series however, we hit what will be the next major story arc that will carry the show into its second half, featuring a good old-fashioned blend of government conspiracies and our hero on the run like a fugitive from the law - It might have been done a million times before, and the reason for this scenario coming about may be borderline ridiculous, but it looks set to inject new life into HEROMAN once again before things ramp up even further later in the show judging by the second set of opening credits.

While just how the second half of HEROMAN will fare remains to be seen, there's little doubt that its first half remains a fun viewing experience throughout, somehow just managing to cling on to its entertainment value even when its plot threatens to enter limbo as we take a break between story arcs.  There's no deep characterisation to speak of and everything that happens is entirely predictable, but if you can forgive that then HEROMAN looks great and works well on a surface level.  If you're looking for an opportunity to kick off your shoes at the end of a long day and relive your cartoon-watching youth without anything liable to trouble the recesses of your tired mind, then this show continues to deliver in spades.

7
Despite threatening to lose its direction briefly, watching HEROMAN is fun, fun, fun all the way.
COMMENT AND DISCUSS
blog comments powered by Disqus