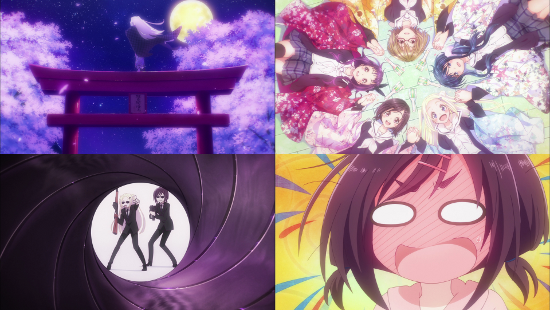 Naru is a very shy, retiring girl. Having found nothing to excel in or get passionate about, she spends her days reading fairy tales and waiting for someone to whisk her away, until one day she spies a “fairy” in the grounds of a local shrine and joins her in an energetic impromtu dance. Asked by the “fairy” if she would like to dance some more, Naru has an attack of self-doubt and scarpers. Imagine her shock the next day when it turns out the “fairy” is a girl named Hana, a transfer student (surprise!) who is manically into Yosakoi freestyle group dancing and is determined to drag Naru out of her shell and into her (as yet non-existent) school club for it.

Writing a review for HaNaYaMaTa is oddly difficult for me (as may be evidenced by how late this review is) because while I liked the show, it did not do anything to set me ablaze and compel me to tell you about it. The show is well balanced, pretty, and has its heart in the right place, but none of these things are stellar enough to bring it into its own. While it still punches far above its weight, especially in the “A bunch of girls make a school club for initially frivolous reasons” category, the storytelling and drama in particular has a vexing habit of falling short of the mark and letting the show down.

The build up and the tension in the storylines are really well-handled, and even manage to throw in some good swerves that had my jaw hitting the floor - one particular talent is how it carefully hides a twist in plain sight that you never see coming but is painfully obvious in retrospect. The various interweaving storylines combine both mundanities of trying to get the Yosakoi club going in the first place, getting over performance nerves, and having each member of the main cast fight their own emotional battles that are getting in their way. The show manages to put a surprising amount of weight into each of these storylines, getting you emotionally invested in a way that overrides any cynicism you may be harbouring. Heck, it honestly made me interested in Yosakoi dancing due to the show's earnest and passionate description of its charms, something I had never even heard of before sitting down to watch it. The cast members are each charming and also vulnerable in their own way that make them compelling to watch and fret over.

This solid preparatory work laid down for the storylines is sadly often let down by the show’s poor execution in capping off its main dramatic storylines - instead of providing any kind of blow-off or firm result, the drama ends up fizzling away while the cast move on. This leaves you feeling intensely dissatisfied, and is especially true at the very end of the show where the massive heart-rending elephant in the room is laughed off as if it is not an issue. This occurs in both a number of the individual character storylines (especially for best friend and band member Yaya) and also the overarching elements, but one place where it does manage to hit home very well is with the main character Naru. Naru is, as mentioned in the synopsis, a shy girl who does not see herself as having any talents worth talking about and has constant crises of confidence, the display of which are handled surprisingly well in the show and really help give her a sense of (almost reluctant and intensely painful) growth over the course of the show as she learns to discover her own talents and stand up for herself.

The one undeniably impressive part HaNaYaMaTa has is the splendour of its backgrounds. They are outright amazing and bring the show to life with their ethereal beauty, in particular in how they do not use any black, instead opting for deep blues and indigoes to provide more light in a scene. You could easily release a coffee table book of them and I would happily pick it up. For the first episode and in a few selective moments afterwards, the rest of the art joins the backgrounds in looking almost obscenely beautiful, especially through the interplay of the backgrounds, lighting and the characters fluid seamless movement. Outside of these moments the animation settles down into looking merely “damn good” and while it never quite reaches the heights of the first episode again it is still no slouch. I constantly waited for Yaya’s overly complicated hairstyle to go off model but it never once did, to the credit of the show. Being a show about freestyle group dancing when this does come around (less frequently then you would expect) you get to see a lot of great motion and care poured into the main character performances. There is not quite the same degree of care in other performances, who are either off-screen, shown in a still image, or made up of nightmarish copy-pasted CG clones.

It is worth noting that I recieved Blu-rays for this review and have to earnestly recommend picking these up in place of the DVDs due to the lavish visual presentation of the show very much deserving the HD medium. The soundtrack also compliments the show well, using the already-very-good opening song frequently during the show itself and supplementing it with some great background music, particularly during the more emotionally incisive moments where they break out the haunting piano.

As mentioned above, HaNaYaMaTa is a good show, but one one that for me does not extend further than that. I enjoyed my time with it and it’s adorable cast, am glad I watched it, even shed a tear or two during its more powerful moments, but the limp ending most of its dramatic arcs and in particular the very ending left me feeling underwhelmed overall. A very good rainy day series, especially for its backgrounds and visually resplendent first episode.

7
Undeniably pretty and emotionally resonant, but not quite top flight.
LATEST REVIEWS