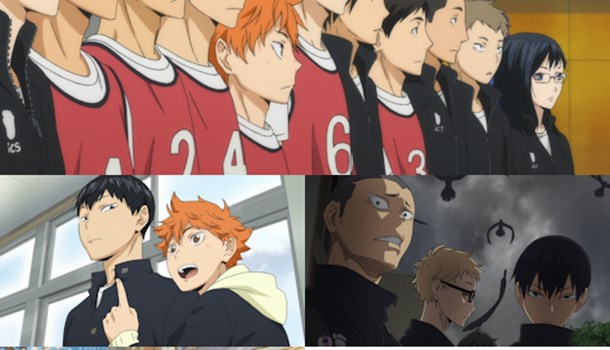 Listen to any successful sportsperson talking about their career, and chances are it'll begin with them recalling a seminal moment in their youth which cemented the love for their chosen sport that led to them seeking to make it their livelihood. Whether it's a first-hand experience - a first visit to a beloved local football club perhaps - or simply watching a pivotal moment in the sport on television, such memories can become powerful drivers for an enthusiastic youngster.

This is certainly the case for Shoyo Hinata, a young boy who finds himself enraptured by television coverage of a national school volleyball championship. More to the point, this diminutive young man can't tear his eyes away from a single player - an individual nicknamed the "Little Giant" for his small stature yet incredible athletic ability which saw him leaping above players much taller than himself to guide his school to victory.

Determined to follow in the footsteps of his new hero, Sho traverses a single-minded path - without any teammates to speak of and only some friends who have no interest in volleyball to rely on, he somehow manages to put together a team (in the loosest sense of the word) and enters his first official match in middle school. This isn't the fairy tale debut he dreams of however, and he's taught a harsh lesson about the nature of the sport and the limits of his own ability, much of which is meted out by an opponent known as the "King of the Court".

Fast forward a little further, and Sho has entered high school and joined the school of his dreams - Karasuno, the former home of the "Little Giant" he so wishes to emulate. Karasuno's team has seen better days however, and things seem set to ruin Sho's dreams as it turns out that the "King" is now also in residence at the school as a fellow volleyball member. How is our protagonist supposed to beat his rival now that he's on the same team?!

As it turns out, the chalk and cheese relationship between Sho and reluctant "monarch" Tobio Kageyama (whose nickname isn't actually a flattering one, incidentally) turns into the foundations of a great pairing on the volleyball court, and with some other notable talents scattered throughout the club the time may just be ripe for Karasuno to return to the summit of high school volleyball, complete with their new wannabe Little Giant waiting in the wings.

If all of this sounds typical for a sports anime series, then you'd be absolutely right - Haikyu hits all of the exact notes you'd expect it to, from its plucky wannabe protagonist through to the smart-alec talented rival/friend and beyond. In lesser hands the results would be as generic as the formula it adheres to, but this is where Haikyu manages to buck the trend and offer up something special, largely on account of its excellent direction.

Even outside of the volleyball court there are flashes of the steady work that the series puts into its presentation - split-second shots that visualise the reputations or personalities of notable characters without leaning into the kind of supernatural craziness you'd see in, say, Saki, and lots of shots that dig deep into the emotions or passion of the cast without saying a word. It's an expressiveness that takes on a life of its own once that cast step onto the court, as the presentation of matches themselves are simply phenomenal. Balls smash against hands, forearms or the floor of the court with real weight and impact, and balls spin and swerve and blast around the place in a manner which is both engaging and satisfying. I'm not expert, but it feels like a good representation of the sport, and it adds immeasurably to the excitement and drama even though the series thus far has only engaged in training and practice matches.

Another mark in Haikyu's favour is the source of its drama - in some shows of this genre, the sport itself comes second to the human element of the series, but here the sport and the human drama is intrinsically linked in a thoroughly enjoyable way. Yes, the cast are all a little too obsessed with volleyball to be believable so a suspension of disbelief is required, but their passion is infectious and their worries or anxieties are easy to understand as a part of the psychology of sport as a whole. By the end of this first volume of the series we're starting to move deep into using the sport as the seat around which all of its drama revolves, making it clear that no one player can become the solo ace that wins the day and that it takes more than just pluck and heart to be a champion and further winning me over in the process - this is exactly the kind of excitement I come to sports anime series for, and Haikyu thus far is delivering in spades.

If the prospect of everything getting a little too technical threatens to put you off, then fear not as the show has made one compromise to keep you on-board - Karasuno's club advisor doesn't have a clue about volleyball, and thus serves as the audience's cipher, always ready and willing to pop up with the necessary "woah, what just happened?" question when something takes place that you might not be able to interpret otherwise. Occasionally this feels a little heavy-handed (such as said advisor explaining to the club's members the various positions within the game even though they know it better than him!) but for the most part it's used sparingly and smartly as a device to keep the narrative clear and concise.

The more we think about it and examine what it offers, the harder it becomes to find any negatives within this first volume of Haikyu. It boasts a varied and enjoyable cast of characters, its depiction of volleyball is compelling, and the animation quality remains absolutely top notch throughout to add that all-important presentational layer into the mix. As a subtitle-only release, it should also be noted that the subtitles on offer here are absolutely top-notch - comprehensive, legible free from major errors or typos. It's a shame that there's no English dub to make the series accessible to a wider audience, but what's here on the disc is excellent, and the Blu-ray presentation we got to enjoy for review gets two thumbs up from us.

Perhaps if we were flooded with sports anime on home video here in the UK we might not have taken to Haikyu in quite the way that we have, but as a fan of the genre when it's done well who has been starved of such series this feels like a breath of fresh air that takes all of the core tenets of this kind of show and presents it impeccably. Even as someone who couldn't call himself a fan of volleyball beyond thinking it looks cool, it's impossible not to be drawn into the pace, passion and terrifying speed of the game as depicted here. Come the end of this first volume chances are you'll be punching the air as points are won and marvelling at the skills on display as much as you might were you watching the real thing, and there can be no greater praise for a sports anime than that.

9
This first volume of the series leaves Haikyu poised at set point; we look forward to seeing if its second half can leap to new heights and spike a winner.
LATEST REVIEWS