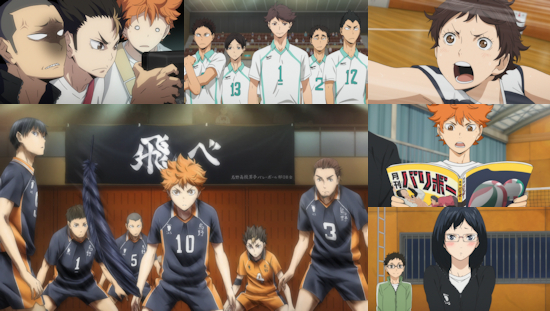 After setting out its stall very nicely over its first batch of episodes, we return for the second half of Haikyu's first season to take in a staple part of any sports anime diet - a tournament-led story arc.

Having learned much about one another and gelled into something resembling an actual volleyball team thanks to their earlier efforts, Karasuno's finest seem well-placed going into the Interscholastic preliminary tournament - at least, until they look at the draw for the tournament and realise the strength of the opponents they'll potentially find themselves facing if they progress. Whether it's coming face-to-face with former teammates or previous opponents, Karasuno will have to scrap for every single point if they want to progress and regain their wings.

This setup allows the second half of Haikyu's first season to deliver a concentrated and largely unbroken series of episodes based around what it does best - wring every ounce of tension and drama out of the act of playing competitive volleyball itself. This is a pure sports anime show at its best, eschewing overblown off-court human drama in favour of the kind of tension borne from the game itself, be it physical or psychological. Even as someone who has no in-depth knowledge of volleyball, it's easy to get a feel for tactical and strategic elements of each match and how they play into unfolding events, and with just six active players on the court at any one time there are ample opportunities to zoom in on a specific player to examine their mindset and psyche at a given time within the game. This even includes side characters who are substitutes for Karasuno, a couple of whom get some big moments to show their own struggles as they seek to imprint their qualities upon the game.

While many a sports anime has dragged itself down via poor pacing of a tournament arc, Haikyu is also impeccable in this regard - the series knows when to speed through uneventful periods and then slow down to capture every moment of a pivotal set of points or a change in the all-important flow of the game, which is does in largely seamless fashion. These episodes do occasionally cut away to flashbacks or other events but never becomes overly preoccupied with them, simply adding in the narrative context necessary in brisk fashion before returning us to the action. Haikyu makes everything it does look so simple, and once it adds in a smattering of humour to add a little charm to the cast and their interactions it has enough in its arsenal to win you over in no time.

The show's animation continues to be accomplished, although if you look carefully you can begin to see the wiring under the board a little - there's quite a lot of reused animation within matches, although the quality of that animation is sufficiently high and hidden well enough to not be to the show's detriment. Beyond this, characters are expressive and the general look and feel of the series fits perfectly whether it's drilling into the show's sense of tension or simply goofing around to provide entertainment.

As a subtitle-only release, subtitles are clear and comprehensive across the release, while the Japanese voice cast give exactly the kind of energetic performances you'd expect from a series about teenage sportsmen. When it landed on our doorstep we were somewhat surprised to see the Blu-ray edition of this release turn up with all twelve of its episodes on a single Blu-ray, but thankfully we didn't note any detriment to video quality during our viewing experience so the video encode seems to be good enough to offset squeezing so much content into so little space.

I could probably sit here all day and espouse the virtues of Haikyu - and specifically the episodes that make up this release - but we'd be in danger of simply gushing and throwing out spoilers. Suffice it to say then that this is simply a great sports anime in the truest sense of the word, digging deep to find what makes volleyball so compelling to those who play or watch it then adding a sheen and narrative that makes it accessible to all and sundry. The result is a true joy to behold, and this first series has grown to take a place in my heart alongside the likes of Giant Killing as representative of the genre at its finest.

9
All the excitement and tension of volleyball without the sweat and sore arms. What's not to like?
COMMENT AND DISCUSS
blog comments powered by Disqus