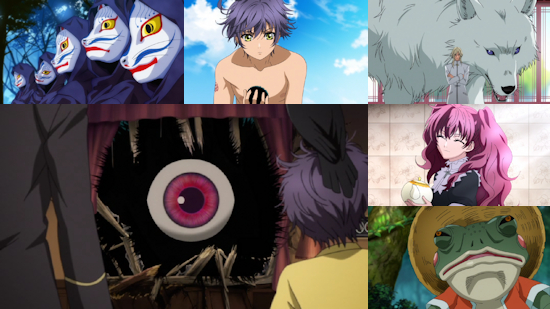 Kyokutei Bakin's epic novel series Hakkenden has found itself at the centre of inspiration for a number of anime productions in recent years, and 2016 in particular has seen a couple of such productions reach the UK. Earlier this year we took a look at Fusé, which had its own unique spin around Hakkenden's Sengoku period tale, and now we find another very different effort come our way from Studio DEEN and their adaptation of manga series Hakkenden: Eight Dogs of the East.

The series begins in sombre fashion - we see a village burning, while the embers of the individual at the centre of our focus seems to be burning out fast. In the midst of this tragedy however, a saviour appears, albeit one who is not exactly someone you could consider as ordinary.

Fast forward a while, and we meet the individual who nearly met his demise properly. Shino is part of a decidedly unusual family, sharing a church with the only other survivors from the village which was otherwise decimated by a plague. Given this status, it isn't too surprising that these three individuals are treated with suspicious and mistrust by the residents in their vicinity, and if they were to know the truth they'd be even less likely to afford Shino and company a warm welcome...

You see, the reason for Shino's survival in the face of the plague is that he has become the holder of a "Sacred Beast" known as Murasame - a god-like power that is also a curse in that it has granted Shino eternal life trapped within his young body as his mind ages. Needless to say, this is a power that has piqued the interest of other parties, with the Church in particular desiring access to Murasame much as they have already courted other Sacred Beast wielders for whatever ends they aspire to. It isn't just Murasame that the Church is after though - they also want to gather the eight "Bead Holders", all of whom have similarly come back from the dead in some shape or form.

So begins Shino and company's efforts to find all of the Bead Holders, which mostly equates to a lot of character-centric stories that dig into the (mostly tragic) back stories of the individuals we meet along the way. In theory this seems like a promising concept - getting to know and learn about these individuals who have seen horrific things or endured real traumas, only to be taken from the release of death and set back in the world to live on.

If only this theory followed through into the reality of Hakkenden - what we're left to endure instead is lots of dull, uninspired and flat storytelling that never really manages to reach any of the kind of emotional or dramatic heights that it should. Many of the tales that we hear are simply recounted second-hand when "show don't tell" should be the prime rule here, and watching characters often disinterestingly relating stories without allowing us to live them vicariously ourselves or even really be able to imagine them. Given that this seems to be the crux of this first season (until it finally builds up to provide a hook into season two's events late on) it's a huge disappointment - nothing that the series does could be considered bad necessarily, but there's nothing within its narrative that ever manages to extend beyond the mediocre either.

It's a real shame, as other elements of the series hold promise - as mentioned the concept holds lots of potential, but the show also has likeable characters with attractive designs to boot, and the animation is certainly limited but handles what little is required of it well enough. Even the show's English dub proves to be pretty decent, with plenty of solid performances and only the occasional jarring line that could have done with another read here or there. Technically, the DVD edition of this series looks just fine, and this isn't exactly the kind of action-packed visual tour de force that necessarily requires the benefits of Blu-ray, so this edition is perfectly acceptable unless you're a Blu-ray die hard.

I really wish I had more to say about Hakkenden: Eight Dogs of the East, but it's hard to find much to comment on. This is a slow-burner of a show which sets out its stall early, and if you don't like the goods on offer at that stall then nothing ever really comes along to change your mind. That was exactly the situation I found myself in - beyond its first couple of episodes I soon found myself struggling to find anything to latch on to glean some enjoyment from the series, and had I not been watching the show for review I doubt I would have lasted the course.

If you can enjoy this series solely for its characters and the broader world it imagines you might get more out of it than I, but otherwise this is an uninspired story that feels like it could have done so much more with higher productive values or a little more ambition. Maybe the second season - also coming our way from MVM Entertainment - will change that, but I'm not holding my breath.

English and Japanese stereo with English subtitles.  Extras consist of two Japanese cast commentary tracks (for episodes one and four), and clean opening and closing animations.

5
Its world and characters have the potential to be interesting, but Hakkenden's story is delivered with no panache or imagination and the result is utterly mediocre.
COMMENT AND DISCUSS
blog comments powered by Disqus