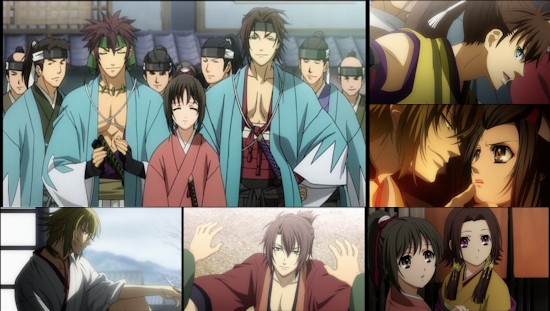 After three full series of samurai, the supernatural and sex appeal, the UK's sudden flood of Hakuoki in animated form comes to an courtesy of the DVD release of a six-part OVA series, subtitled A Memory of Snow Flowers.

As something of an oddity within the franchise's animated outings, this OVA sits between two episodes of the show's first series - between episodes eight and nine to be precise. To make full use of its cast of characters, each episode takes in the same broad story - that of Chizuru going undercover as a geisha to discover the truth of a plot to attack the Shinsengumi and the time surrounding this operation - but views it from a different perspective, switching to another member of its male cast each time.

Although this treatment could easily descend into the kind of tedium which plagued The Melancholy of Haruhi Suzumiya's Endless Eight arc, it's utilised well here - watching the pieces of the story from each perspective come together and coalesce to form a complete picture is really rather satisfying, especially as the episodes don't feel the need to hold your hand through that process and thus lets you build that picture yourself for the most part.

These episodes also succeed in being enjoyable largely based upon the strength of the characters that each episode inherently relies upon - your enjoyment will depend largely upon whether you like these individuals (or how much you like it each one), but each sliver of the story offers a little introspective time for each leading man while also giving them some dedicated screen time to ooze whatever charm, awkward endearingness or other facets they might have to offer. Given that we could perhaps criticise Hakuoki for not always making enough of its characters due simply to its design and the requirement to juggle so many of them, this particular setup makes for a perfect way to redress that imbalance and give everybody some equal time in the spotlight. Except for Chizuru, that is, but who cares about a girl in a show like this? Sadly, our poor old female lead is relegated to little more than a blank slate for those around her to protect or fawn over.

As per previous entries in the series, A Memory of Snow Flowers boasts functional rather than astounding animation - it does everything required of it without ever stretching itself, but does boast some nicely framed shots or colourful moments to give it a pleasingly simple aesthetic. In terms of this UK DVD release, the transfer here looks a little ropey - not outright bad and certainly not notable enough to spoil the viewing experience, but a little indistinct and not as sharp as you might hope.

Following some perceived improvements as its various series progressed, the English dub for this OVA seems to have returned to the doldrums, sporting an odd blend of cringe-inducing over-acting and placid monotony which often doesn't suit the tone of the series. It isn't a complete disaster but it's one of the worst dubs I've heard in a fair while overall, and although both English audio and subtitles make use of language which really doesn't fit its historical setting (I'm guessing that "meh" wasn't a word that anyone used in the 1860s, but I'm no linguist!) the Japanese audio track at least has a little more energy and expression whilst also knowing when to add a dash of restraint to proceedings.

Compared to everything that has come before from Hakuoki, A Memory of Snow Flowers doesn't have a huge amount to offer in story-telling terms - it is, after all, a simple side story to fill in some gaps in its chronology - but it makes up for that with a well-utilised premise that allows these episodes to really make full use of their characters. How much you enjoy these episodes depends entirely upon how much you like those characters, but assuming you feel some affinity with its male cast then there'll definitely be something here for you, and the result is an enjoyable OVA to watch that surpasses its limited subject matter quite admirably.

English and Japanese stereo audio with English subtitles.  The only extras here are textless opening and ending credits.

6
There's little substance to its story, but this is more than made up for by this OVA's strength of character.
COMMENT AND DISCUSS
blog comments powered by Disqus