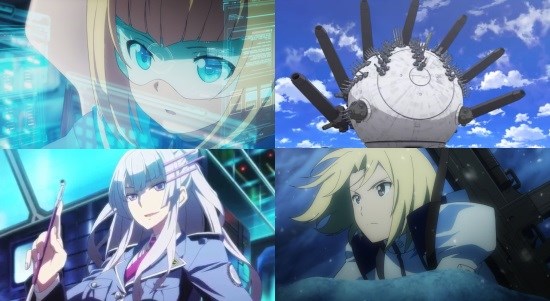 The pitch for Heavy Object was always going to be one that all-but guaranteed its jump from light novel series to anime. You can hear some enthusiastic publisher in the board room saying "it’s like Gundam, but if the Gundam was the Death Star!" It’s certainly not hard to see why such a concept would hit all the right notes, especially when you chuck in "by the author of A Certain Magical Index". So then, how does the show itself stack up once they’ve (literally and figuratively) rolled out the big guns?

War has changed. With the creation of colossal armoured vehicles known as ‘objects’ infantry, air force and navy have been rendered almost totally obsolete as nations clash instead with the powerful objects against which only other objects stand a chance (rarely has the word ‘objects’ been used so much in a single sentence). Or so it seems... at a frozen base in the North, Qwenther - an engineer fascinated by the objects - and Havia, a young nobleman serving to ensure his inheritance, are about to prove that man still has a role to play on the battlefield. When their base's object Baby Magnum is destroyed and its pilot captured, the two find themselves engaged in a deadly guerrilla war against an enemy object as they desperately try to rescue the idol-like Milinda Brantini.

The opening three episodes of Heavy Object are great. The base attack and subsequent counter attack are laid out really well, with some great action set pieces and a pretty tightly written plot combining to make a very strong arc. Qwenthur and Havia are a fun pair and they come across as pretty realistic characters – they want to avoid hard labour and talk about girls instead (particularly Milinda and the buxom Commander Frolaytia) which fits in with most common soldiers you’ll see in the media, and the two are genuinely likable, as are the rest of the cast.

Sadly though it’s very much a case of diminishing returns here, as subsequent arcs turn out to be almost an exact replay of the first one as the guys become victims of their own success and are sent out over and over to fight against a series of objects which they invariably have to defeat using some desperate strategy - it’s all just a bit... samey. The objects become less and less interesting and have less and less action (Baby Magnum is pretty much a joke by the third arc and you’ll be wondering in exactly which universe it's supposed to be an almighty war machine) and nothing really happens. Qwenthur and Havia devolve into characters who primarily just want to talk about Frolaytia’s various body parts (although at least she herself remains a fairly fun character who just about manages to avoid becoming nothing more than the butt of every ‘joke’) and Milinda has nothing to do than become jealous and love-lorn. To compound matters, episode seven ends up having some frankly offensive comments on the relationship between the military and the media which boils down to ‘if you didn’t come and report on it we could do what we wanted and it would be better for everyone’. It’s been suggested that this is a move in line with Japan’s recent drive to change their laws regarding military action but to be honest I feel that it’s much more in line American military philosophy, which is far worse.

Ultimately the series just ends up priving to be pretty disappointing on all fronts at this point, having seemingly front-loaded all its best ideas in a fashion that makes the series seem to be much more deserving of a standalone film or OVA where it could have stood out without having to try and come up with something else. At any rate, this isn’t going to be the big stand-out mecha show of the season. But who knows, Kazuma Kamichi didn’t get his Index universe right until A Certain Scientific Railgun made it all better, so maybe a Frolaytia-centred spin-off is just around the corner to knock our collective socks off?

6
A real blast of a start, but once the smoke clears there's nothing there.